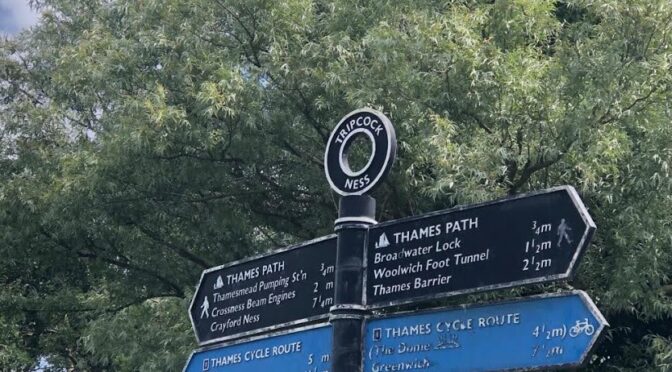 On a reasonably warm and sunny morning, seventeen members met up at Woolwich Arsenal station to commence our Thameside walk. First was a stroll through the Royal Arsenal complex with its many attractive old buildings and expensive-looking new flats. A sculpture of sixteen bronze figures, reminiscent of an Anthony Gormley, welcomed us to the Thames Path along which we headed east. After a short while, we detoured into a park to climb Gallions Hill ,constructed from rubble and soil excavated during construction of a nearby housing estate. There were a few grumbles that a flat walk had been promised but the panoramic views from the top silenced most of them! Returning to the river, we passed Tripcock Point, off which occurred Britain’s worst peace-time disaster when the pleasure cruiser Princess Alice sank in 1878 with the loss of some 700 souls.

After a stop for a picnic lunch, we continued past the Crossness Pumping Station with its rather mundane exterior hiding a magnificent interior. Leaving the Thames, we headed through a nature reserve with frisky horses looking for sustenance before arriving at the Morgan Belvedere pub where we found our own sustenance. A staggered return to the nearby station heralded the end of an enjoyable walk.

Photos from Ida, Nita and Gillian