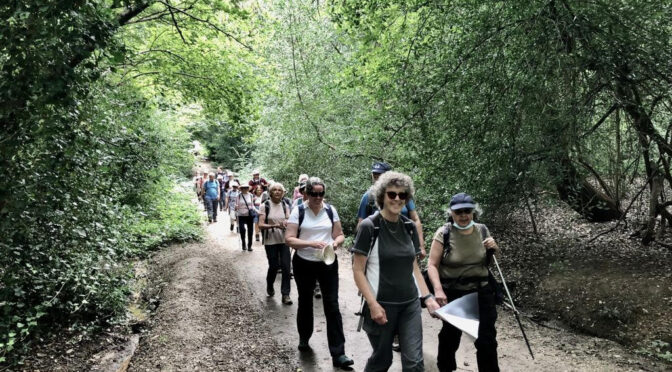 Twenty one Polyramblers arrived at Wimbledon Park Station despite the problems on several tube lines. After a short walk up hill we were in Wimbledon Park and went past a water feature in the children’s play area and past the pond. There were lots of ducks and geese here.

After leaving the park we walked through a residential area on our way to Wimbledon Common. Jennifer and I had seen a friendly lady when we did the recce and we were again greeted by the same lady, Farida. She was originally  from Indonesia, a winner of several gold and silver medals and now based in UK. She was keen to find out more about the Polyramblers and we hope to see her on a walk.

At the end of Queensmere Road, we crossed the road in to Wimbledon Common.  We walked along a  pleasant path through trees leading to open space and on to the Windmill. Here many  Polyramblers took advantage of the café and toilets. Sandra peeled off here.

After a little detour, Jennifer and I were able to lead the group to Richmond Park. As it was a nice sunny day  the park was busy. We saw two large groups of deer. We had picnic at Pen Ponds with several ducks. After, that we made our way to Petersham Gate after taking in the views from Pembroke Lodge.

We made our way to Richmond Station along the river. Many thanks to everyone for making it a great day

Sunita  (photos by Ida and Gillian)