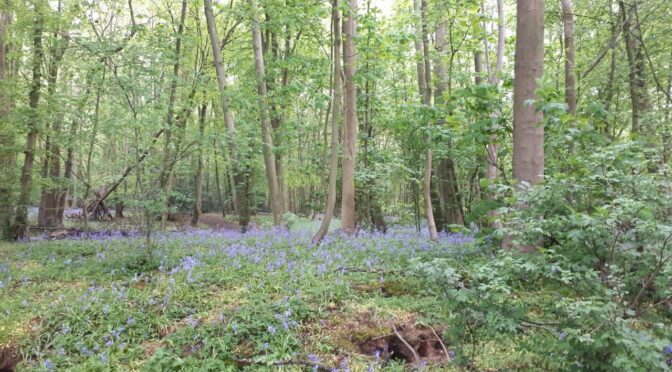 I was joined by eight Poly Ramblers at King’s Cross to get the 10.27 Cambridge train. We were joined at Welwyn North by two walkers who had got on at Finsbury Park and one who had parked his car at Knebworth and travelled one stop down the line.

We set off from Welwyn North through the village of Digswell, and I at least was wondering when the forecast heavy rain would start. Turning off the road we went up a track beside the quaintly named River Mimram, which was hidden by trees and bushes. I had decided to shorten the original route by about a mile and we turned left on to a field path. Unfortunately it was not the track I had intended to take but fortunately it shortened the walk by a few more minutes and allowed us to arrive at the pub right on time.

Being quite high up we enjoyed extensive views of the Hertfordshire countryside, which looks especially attractive at this time of year. We soon arrived at the village of Burnham Green, which does in fact have a large village green. We paused for a few minutes on the green before going on to Woolmer Green, whose village green I have never seen. Before reaching Woolmer Green we had to negotiate the intriguingly name Robbery Bottom Lane. Apparently it was a haunt of highwaymen in days gone by. One of these was James Whitney of Stevenage who plied his trade around 1750.

Shortly after leaving Robbery Bottom Lane we reached Woolmer Green and stopped to look at the aviary at the Chequers pub. Budgies and other birds came to say hello, or perhaps they were just looking for food. Leaving Woolmer Green we passed under the East Coast Main Line and ascended Wych Elm Lane, which was the inspiration for this walk. I used to see it when I travelled regularly on the ECML and planned the walk around it. At the top of the hill we crossed the A1(M) by which time people were telling me they were hungry and asking if the pub really did exist.

They were soon happier when we arrived at the Robin Hood and Little John in Rabley Heath to find two tables under canopies reserved for us. Drink was taken, in moderation, and meals ordered. These came in generous portions and the omelettes looked especially tasty. It was a bit chilly but all seemed to enjoy their meal, although one person complained that there were no desserts on the menu. Rabley Heath comprises a pub and about six houses so it is a hamlet rather than a village.

After lunch we had a half hour walk to Knebworth station. We walked along the side of a field of rapeseed and joined the road from Old Knebworth. We crossed the A1(M) again and carried on downhill. While we were waiting on the station the sun tried to come out. Thankfully the heavy rain which was forecast didn‘t arrive till I was leaving Barons Court station on the way home.

Thanks to all who joined me for the walk. I hope you enjoyed it.