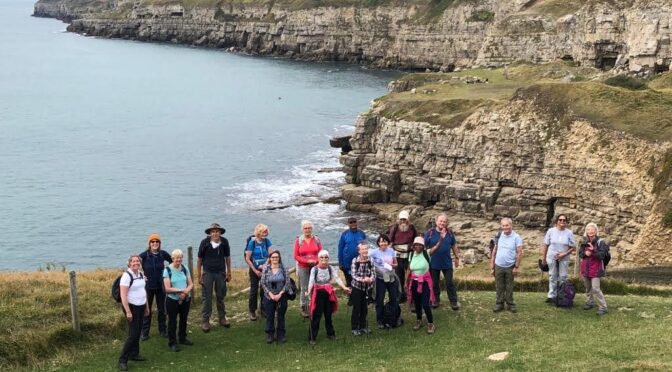 Eighteen hikers took the bus from Swanage to Langton Matravers on what promised to be another glorious, mild, sunny day. We made our way to Spyway Barn a listed building which is said to have been used by smugglers in the 19th century. Continuing down to the coast we soon arrived at the steps down to Dancing Ledge. This was a Purbeck limestone quarry and the platform by the sea left from the quarrying gets its name due to it being a similar size to a ballroom and the waves ‘dancing’ over it. One member found one of the many fossils to be discovered in this area of the Jurassic coast. We then continued west along the South West Coast Path to Winspit. One observant Poly pointed out the strip lynchets on the hill side. These are among the best preserved examples of this form of medieval agriculture in Britain. We looked into the caves at Winspit which remain from when, until about 1940, this was a quarry which provided stone for many London buildings. Some have been sealed off as they are home to the Greater Horseshoe bat, Britain’s largest bat now in danger of extinction. We watched climbers practising on the rugged rocks.

Further along the SWCP we came to St. Adhelm’s head, the most southerly point of the Isle of Purbeck, where we stopped for our picnic sitting around the memorial to radar research which took place there during WW2. We were given a briefing by one of the volunteers at the National Coastwatch Institution lookout point and visited St. Adhelm’s Chapel. The latter was buzzing with a large bee colony. This tiny Norman chapel, about 800 years old, is one of the oldest churches in England. After passing the coastguard’s cottages, built in 1834, we soon came to the steep steps leading down to a valley. Here some members decided to take a more gentle path up inland towards the pub, while about eight of us climbed the steps back up on the other side. These proved to be far less challenging than the ones down and we were rewarded by amazing views of Chapman’s Pool below and Portland Bill in the distance. After a short walk inland we came to the pretty hamlet of Worth Matravers where we met up with the rest of the group at the, very busy, Square and Compass pub. Refreshed we set of for the final leg, along the Priest’s Way, visiting the dinosaur footprints at Keat’s Quarry. We arrived in Langton Matravers in time to visit the parish church and for a couple of members, another quick visit to the pub. We all agreed it had been an excellent day walking in this spectacular area, steeped in history, and with the extra blessing of beautiful weather.

Report by Susan.  Photos by Ida and Stuart