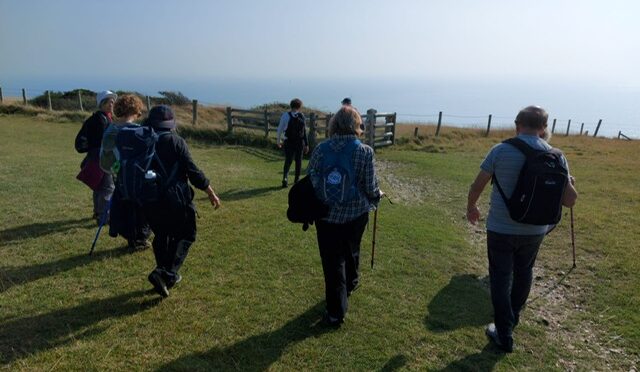 The Strollers met at Swanage bus station to catch the no 50 to the stop at the foot of Ballard Down. After getting off the bus we crossed the road to start the climb up to the flat, grassy ridge which is Ballard Down. At the start of the ridge there is an obelisk, erected in 1892 , which commemorates the new supply of drinking water to Swanage. For the next 2.5 miles we walked along the ridge. The fine, sunny weather had brought many people out, many with their dogs and we met a pair of poodles with unusual grey and black markings. As we approached the Old Harry Rocks we met more and more people. Although it was warm and sunny the visibility over Poole Bay wasn’t good enough to see the Isle of Wight and we could just make out the Admirals Walk building in Bournemouth. Some members of the group ventured out on to the edge of the cliffs while the more cautious ones, myself included, stayed well back.
To continue we descended to the village of Studland, where we met the Hikers on their way to Joe’s café. I was determined to have a ham baguette in the Bankes Arms but the rest of the party went down to Joe’s café where they queued for 45 minutes to get an ice cream. At the Bankes Arms I had to wait 25 minutes for my Guinness and another 10 for my ham baguette but passed the time by reading , using the Kindle app on my phone. I was just starting to enjoy my baguette when I saw the rest of the strollers walking past the window to gather for the rest of the walk. Feeling responsible as walk leader I rushed out to join them with half a baguette in my hand, but they were kind enough to let me finish before starting out.
To return to Swanage we crossed Ballard Down at roughly right angles to our morning route. It was a long haul up to the top and we had a break when we reached the top. Thanks to Sunita for saving me a place on the stone bench, which I had visited previously with the Bournemouth Caledonian Society. I had suspected that the descent on the other side into Swanage would be difficult, and I was right. The path was quite steep and consisted of stones and gravel, and those of us with walking poles were grateful for them. One resourceful member of the group found a way of making the going easier by walking on the verge of the path, which I as leader should have thought of. On the final stage of the walk we passed some interesting houses, one of which we judged to be semi-art deco.

Report by Sandy.  Photos by Steve