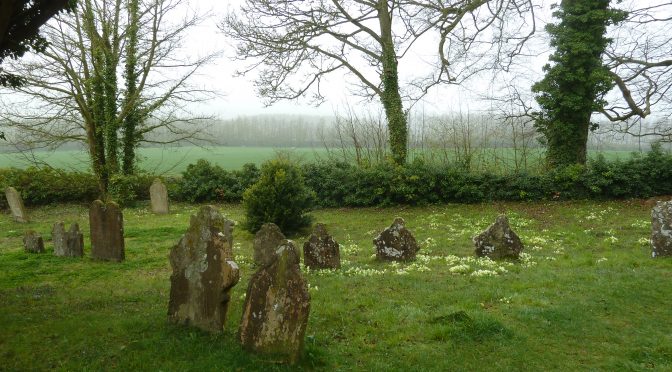 Ten Polyramblers got off the train at Yalding, with unusually, equal numbers of women and men. It was somewhat misty but otherwise dry and mild.The club last visited Yalding a couple of years ago, when widespread flooding of the Medway had caused much damage to property and vehicles. Some expensive looking homes had been built overlooking the marina in the intervening period. We set off along the river, with me bringing up the rear as usual. After a few minutes, I found that I was alone, the rest of the group having turned off. Fortunately, I was able to see them in the distance and was able to catch them up after 15 minutes or so. No one seemed to have missed me. We headed across fields and through woods, passing Roydon Hall, which dates from the time of Henry VIII. It was looking a little sad, being currently unoccupied, but one could see that in its heyday it would have been magnificent. We walked through West Peckham, the churchyard having a magnificent display of primulae. The next village was Mereworth, with it’s unusual 18th century church, built in Palladian style. It was built by the 7th Earl of Westmoreland, who had demolished the previous church to make way for an extension to his castle. As one does. We were soon in Hurst Wood where much discussion took place about a suitable place for our picnic. After a while we agreed on a grassy bank and sat ourselves down. Stuart had brought a small gas fired camping stove and we were all a little envious of his plan to do a toasted sandwich. Unfortunately, he’d forgotten to bring any matches, and as there were no smokers amongst us, that was that. The best laid plans….. Our stop was abbreviated, as it began to rain. We continued through woods with an avenue of mature redwoods, a rare sight in the UK. After a further hour or so of undulating walking we were in Borough Green, in good time for our train. It had been quite a strenuous day’s walking and we were all looking forward to getting home and putting our feet up with a cup of tea. We saluted our leader,  Susan, who was off to see one of her dance pupils perform.

Thanks for a great day Susan.