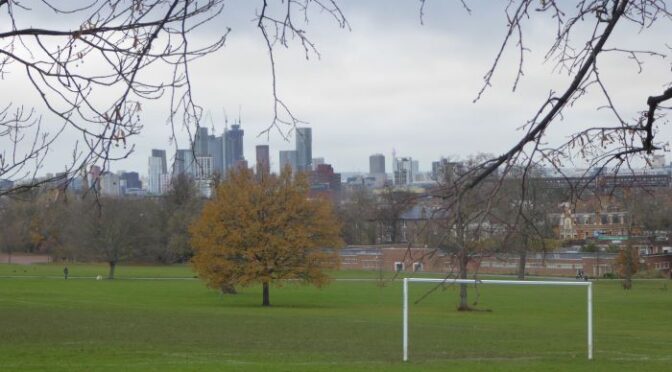 We made our way from Brixton tube, crossing Electric Avenue, to Brockwell Park. We visited the walled garden, where we had an interesting chat with a volunteer and bought jams which are made from the fruit grown in the orchard. After passing the Triton clock tower and Brockwell Hall we crossed the road to Herne Hill station. Despite having told the participants we did not have time to stop at the Sunday market outside the station, the leader and several others succumbed to a delicious jam doughnut. Our next green space was John Ruskin Park, named after the famous writer, poet, philosopher and polymath who lived nearby. Near the exit we saw the portico of 170 Denmark Hill which still stands as a reminder of the eight houses cleared to make way for the new park at the beginning of the 20th century. We passed through Green Dale Fields and by Alleyn’s school before descending to Dulwich Village. Here we were able to learn about the famous actor and businessman Edward Alleyn from an info point and admire the almshouses and chapel he built in 1616. It had started to rain so we were pleased to get to our lunch spot at the café in the grade 2 listed Dulwich Park.

After lunch we proceeded up Cox’s walk, opened in 1742 by the publican Cox to link his pub to Sydenham Wells, and through the ancient Sydenham Hill Woods which were originally part of the Great North Wood. Our route took us through the beautifully kept Sydenham Wells Park and on to Crystal Palace Park with its grade 1 listed dinosaur models created from 1854, the first attempt to create full scale models of extinct animals. We went our various ways at Crystal Palace station and agreed it had been very pleasant suburban walk and informative for those new to the area.