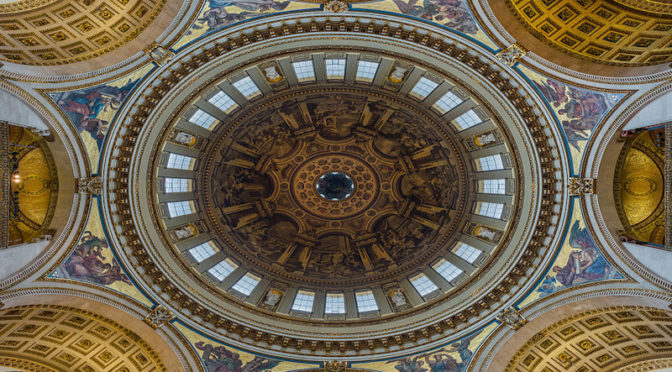 On a grey Sunday before Christmas, 13 Polyramblers met at Victoria tube station for a walk passing four cathedrals and attending a carol service at a fifth.  The first was Westminster Cathedral, or the Metropolitan Cathedral of the Precious Blood of Our Lord Jesus Christ,  the largest Catholic church building in England and Wales and the seat of the Archbishop of Westminster.   We sneaked a quick look inside the neo-byzantine style cathedral. We then followed quiet streets to Petty France where Danny and Sandy showed us where they used to work for London Underground.  We passed a Chanel lamppost.  It is rumoured that the Duke of Westminster’ – whose family has owned large chunks of London for centuries – ‘was in love with Coco Chanel in the 1920s and put her logo on all the lights in his borough to make it really obvious how much she lit up his life.  However, Westminster Council confirmed to the Telegraph a few years ago that it’s pure myth. The entwined ‘C’ shapes in fact stand for City Council and were only installed in the 1950s.  We made our way to Westminster Abbey (which is not technically a cathedral but let’s not bother with such detail) and then Dean’s Yard, Great College Street and Victoria Tower Gardens where we stopped by Emmeline Pankhurst’s statue.  We crossed Lambeth Bridge, did a tour of Archbishop’s Park and followed Lambeth Road to St George’s Cathedral, the Metropolitan Cathedral Church of St George, which is the seat of the Archbishop of Southwark.  We continued along quiet streets to Trinity Church Square and then to Tabard Street where we had lunch at the Royal Oak.  As we were leaving, Barbara joined the walk – but Sandy left us to go to a carol service in Putney.  Dominique, who works in the Borough, led the walk to Southwark Cathedral – or the Cathedral and Collegiate Church of St Saviour and St Mary Overie, Southwark, London –  bypassing Borough Market which looked very busy.  We went in the cathedral and some of us saw Doorkins Magnificat, the cathedral’s cat, near the nativity crib.  We followed the south bank of the Thames, crossed the Millenium Bridge and made our way to St Paul’s Cathedral where we joined the queue for the 4.00 Christmas Carol Service.