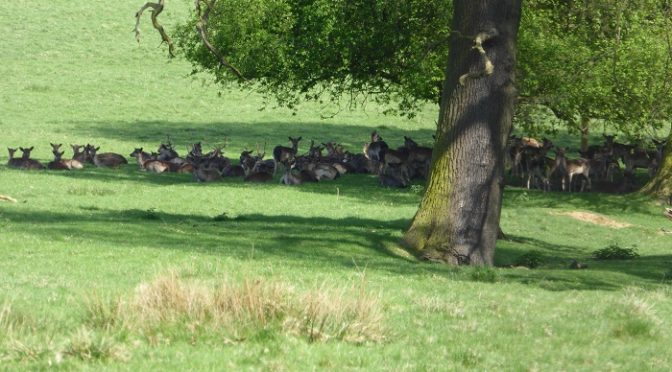 Twenty-seven  excited,  noisy, uncontrollable  walkers  met (eventually) at the station at Theydon Bois (according to the Oxford Dictionary of British Place Names “Probably “valley where thatching materials are got” plus manorial suffix from the “de Bosco” or “Boys” family, here in the 12th century”) for what turned out to be a delightful walk in the warm summery April sunshine. Just a light breeze to keep us cool. Once we had negotiated a narrow path beside a treacherous ditch and our only steep although not very long climb and crossing the M25 (thoughts of Gerald) we were soon in the dappled sunlight filtering through the fresh green of the huge trees of Epping Forest.  Picnic lunch in the shade of the trees, seated on conveniently sited decaying logs. Forget ants in your pants, I was more worried about stag beetles! But no insect invasions were reported. As we made our way up through the wood beside the City of London Deer Sanctuary there was no sign of the deer. I wondered if they were no longer there, fearing the worst. But eventually they could be seen and described, all together, sheltering under a large oak tree in the middle of the vast park. I’ve found an article on the Internet from 2010 (http://www.guardian-series.co.uk/news4985176.THEYDON_BOIS__Deer_sanctuary_documentary_will_highlight_little_known_beauty_spot/ )  answering Pauline’s query about why it is called a Deer Sanctuary. Just one hitch when Wendy jolted her back as we were in the middle of the forest but two burly strong helpers leaped forward to support her. The group picked up speed as news of the proximity of the patisserie and pub spread! Wendy’s team, who decided to take the direct route along the pavement, made it to the patisserie and got their order in before the rest of us, who took the route through a last section of forest.

Thank you to the Polyramblers who came along to help guide our blind friends. We couldn’t offer the walk without you!