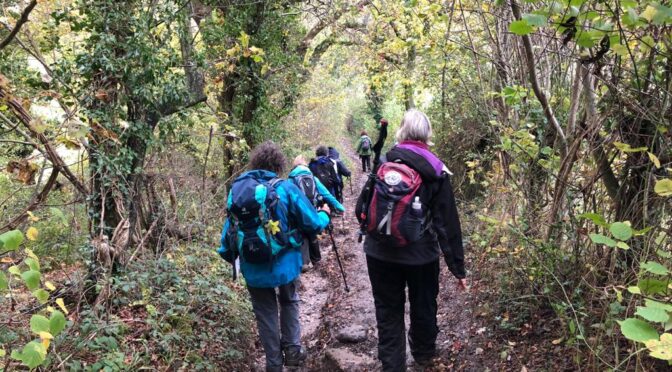 Eleven polys made their way in small groups to Upper Warlingham in  Surrey. Where was the 12th member of the party? The second leader had missed the train, due to the closure of the district line and was on the next one arriving in 30 minutes! While we used the facilities at the station one at a time, we regrouped and I set off with 5 members, leaving some ‘faster’ walkers behind to wait for their leader. After a fairly short steep climb up some earth steps we made our way through woods and farmland and after a while the second group had caught up. They must have bounded up the steps. We arrived at the wood in which we had got lost on the recce and triumphantly entered it by the path we had struggled to find before. Unfortunately, due to the paths being covered by fallen leaves, it was difficult to see which one to take and we proceeded on the wrong one AGAIN!! We came out at a different place and fortunately found some kind ladies who directed us back towards the old Croydon mental hospital, now a gated residential area, from where we should have been able to get back on track. However, we seemed to have approached it from a different angle and the path remained elusive! Some walkers were mentioning lunch so we partook of our picnic among the trees, all extremely rigorously socially distanced. Hilary and I searched for the path but to no avail while Jennifer gained some useful information from a passer by. Refreshed, we set off and thanks to some helpful locals we made our way towards the next landmark, the Old Bear pub in Fickleshole. From there we were back on the correct route and the rest of the walk was uneventful except for both leaders slipping on a slope! Irene brought out her always comprehensive first aid kit to disinfect Jennifer’s finger. We had to negotiate a few rather poorly maintained stiles as we passed from Surrey in to Kent. We commented on how different areas approach the upkeep of walking routes. Several members remarked on how beautiful the countryside was even though we never left Greater London. It was a shame that the view over Canary Wharf was hidden by clouds and mist. We arrived at Hayes only a little later than expected still in albeit fading daylight and boarded the train home. While the groups did get a little mixed up due to the various mishaps, with the leaders conferring on the route, we agreed we all kept well distanced at all times, walking in groups of three or four and split up on the journeys. The weather was very kind to us, just a very brief moment of light rain towards the end. On the train some of us compared pedometer apps to see how much extra we had done, about 1.5-2 miles depending on the app. We decided that we had ‘gone out with a bang’ as we would most probably not be walking again for some time.