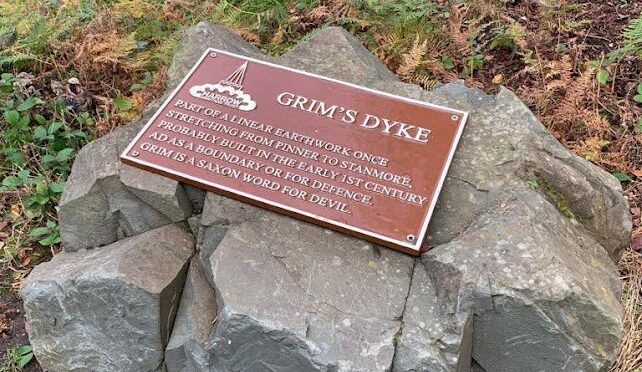 Twenty four walkers and  Daisy the dog set off from Stanmore station towards Stanmore Country Park. We welcomed four new walkers.  Considering the weather at the start of the day, we were delighted that the sun shone & blue skies drifted overhead as we set off on the walk.  Entering the country park, we took the Eastern route and followed the Nature trail to Spring Meadows. After a steady climb to viewpoint, we were rewarded with spectacular panoramic view of the capital. Clearly visible were Canary Wharf, The Shard, BT tower, Wembley Stadium to name a few.

A short detour off the Country Park to Pear Wood to see a peacefully calm Fish Pond (Pear Lake) passing the Grims Dyke on route. The Grims Dyke is part of a linear earthwork once stretching from Pinner to Stanmore.

We had a picnic lunch at viewpoint in glorious sunshine. We proceeded to Stanmore Little Common passing Caesar’s and Spring and then Brewers’ Ponds. At this halfway point, two walkers left, while the remaining walkers continued towards Bentley Priory Nature Reserve. Once in the reserve, we followed the Deer Path and saw an imagining large fallow deer enclosure. We were delighted to see the long horn cattle grazing in the woodland. We left the nature reserve to head toward Stanmore where some walkers headed for coffee shops while some just headed back to the station to make their way home. Sadly, no pubs in Stanmore!

Thank you all for coming and sharing our countryside. Overall distance walked around 5.5 miles/8.8Km

Photos by Nita and Stuart