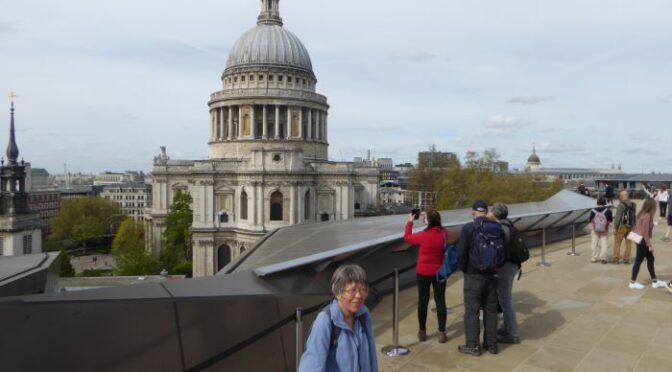 Unusually this walk began with a visit to the roof terrace of One New Change shopping centre next to St Pauls, which opened in 2010.  The purpose was to contrast the current London skyline with that in Dickens’ time, dominated by church spires blackened by soot. I was surprised to find that most of the group had never been up there before.  Having viewed , 23 Poly Ramblers set of at a leisurely pace through the city and alongside the river, taking in some of the sites associated with Dickens era. We headed down Cheapside towards the Bank of England, Royal Exchange and the Mansion House. Cheapside was one of the great working thoroughfares of the Victorian metropolis. Pip’s stagecoach brought him to an Inn off Cheapside in Great Expectations. Continuing down Cornhill, near the dwelling of Scrooge,  Pam pointed out the Walter Gilbert doors, carved with panels to commemorate the history of the area, including the Bronte sisters, although not Dickens.  We ducked down a side alley to find two Victorian chop houses,  the lunch venue of choice for Victorian city clerks.  These were still in business.

On to Lombard Street and its ancient street signs; we passed The Monument, which featured in Martin Chuzzlewit, and then down to Lower Thames Street and Billingsgate Market.  After pausing at the river to view the Custom House we headed towards the Tower via St Dunstans in the East (a blitz damaged church made into a lovely garden), St Olaves Church and Trinity House. Before long we arrived at  St Katherine’s Dock, opened in 1828 to handle the increasing amounts of shipping coming to London from the British Empire. Eschewing the pricey eateries, including the 1980s Dickens Inn, we continued to the Hermitage Riverside Memorial Garden on the riverside, created in memory of the East End residents killed in the blitz, where we ate our picnic. Liquid refreshment was taken at the Town of Ramsgate on Wapping High Street where we all managed to squeeze into their outside space. We continued east, passing the Prospect of Whitby pub built in 1520 where Dickens was reputed to have been a customer. The walk took us over Shadwell Dock and into King Edward VII memorial park. Around this point my guidebook instructions became vague and by common consent we abandoned attempts to find the Grapes, another historic pub, in favour of the ‘Yurt Cafe’ near Limehouse DLR. Absolutely no connection with Dickens but very nice tea and cake.