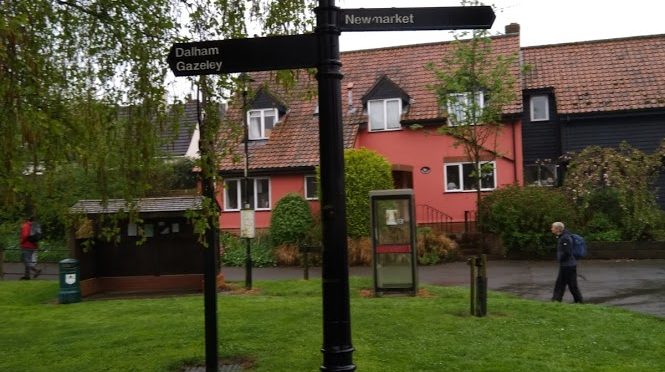 Eleven of the Icknield Way stalwarts gathered at Kings Cross for the journey to Dullingham via Cambridge and Newmarket. We were sorry to be missing Mike who had a knee injury and Mary and Anna who had other commitments.  We managed to alight the train without leaving any personal belongings behind and set off at pace to retrace our steps for over a mile to the point where we left the path last June. The weather forecast was so awful that we were thankful that it was only drizzling, but many of us wore gloves. We arrived in the village of Stetchworth as noon arrived and Stuart decided we should stop for a swift half at the Marquis of Granby. Refreshed, we continued on a north easterly course on lanes and farm tracks to the next village of Cheveley. By this time we were getting hungry and chilly and headed to the church for shelter to eat our packed lunches. We passed a field of very well cared for racing horses on the next stretch to Ashley where we had pub stop number two at the Crown. We all bundled into the quirkily decorated back room and soon spotted the bagatelle type game on the wall (tuppence a go, proceeds to charity). There being no other use for two pence  pieces, a number of us had a shot at pushing the handle to get the ball bearing into the right hole – with zero success. Then Dominique stepped up with some reluctance and won a dozen times in a row, which caused great hilarity. Eventually we dragged ourselves away from the game and the warm pub, stopping at church number two  where Geoffrey was invited to try out the newly tuned piano.  We continuedto our final destination of the day, the village of Dalham, crossing the border from Cambridgeshire into Suffolk en route. We arrived in the village  40 minutes before our taxis were due. Most of the group decided on to walk up to the church rather than have another drink. This turned out to be an extra half a mile uphill (and the church was closed).  Stuart kept up club standards by visiting the Affleck Arms. We stayed in Newmarket overnight and ate at the New Wellington pub. It looked  unpromising from the outside but I was relieved to find that Trip Advisor was right and the food and service were both very good.

Next morning our taxis took us back to Dalham and we continued on the trail. We passed Dalham Hall, once home to  Cecil Rhodes, and then on to the village of Gazeley where we visited church number four of the weekend. The route took us north to cross under the A14 and then the railway before continuing through woods and past an outdoor pig farm to arrive at the village of Herringswell where we ate our sandwiches in the churchyard. A passing local offered to come back and open the church for us but sadly there was no time and the chill wind was getting up. Next stop was Tuddenham where we received a friendly welcome at the White Hart, the only pub on this section. The last leg saw a change of scenery as we entered the Breckland, walking through Cavenham Heath nature reserve. After a mile or so we crossed the River Lark, the biggest river we had seen all weekend.  From there it was a short walk into Icklingham (two pubs, both closed down) where by luck our taxis arrived just as we did and we headed to Kennett station for our train home.

Thanks to everyone for being such a good group.  Sadly no pubs on the final stage in June.