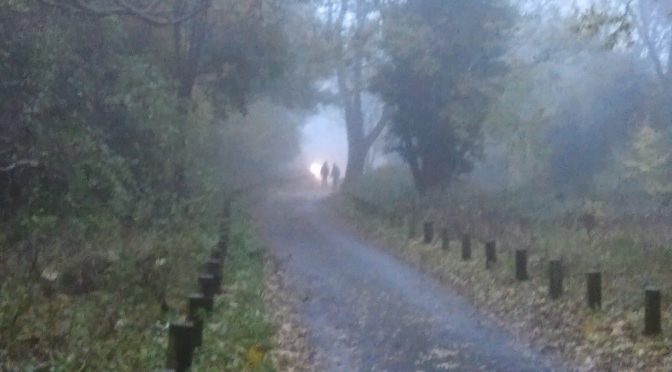 Eight of us  alighted at Guildford on a mild and misty morning. It was good to have Sandra with us, making her 1st appearance after breaking her ankle in September. The weather forecast was for rain pretty much all day. Undaunted, we set off south along the Wey navigation, a route we have done many times in the past, but usually in the other direction.

The river  was lively with a few crews out rowing. On reaching the North Downs way, we crossed and headed east, through Shalford Park. Skirting a pleasant between the wars development, we continued eastwards through Chantris woods; the autumn colours still spectacular despite recent rain. Emerging into the open, we gradually  ascended  Pewley Down. The view from the top was somewhat obscured by mist, but still  worth the effort. We made our way down past  Telegraph House, one of a series of signalling stations between the Admiralty and Portsmouth into the town and took a turn round the castle grounds. Back at the river, Gillian and Stuart said their goodbyes and the rest of us had lunch in the George Abbott pub. This has been extensively restored following flooding a couple of years ago and was very lively, with people assembling to watch the England v South Africa rugby match. There were plenty of helpful staff and we were well looked after. Sandra and Rosie took the train back, leaving myself, Sunita, Pam and Geoffrey for the afternoon section. We walked north along the navigation, passing the town wharf, before heading up to the Cathedral via the university campus. The cathedral is undergoing refurbishment both internally and externally. The guide advised us that despite having a cathedral, Guildford is not a city, a royal charter being required for this. Thanks to errors in my route finding it was pretty murky by the time we had walked down through Onslow village and up to Henley fort. This ridge was the route for the old Portsmouth road; sadly the views weren’t half as clear as on the walkover. Still, overall it was a decent day to be out. Despite the grim forecast, there were only a couple of occasions when full waterproofs had to be donned. Thanks to those who came out and kept me company.  Mike