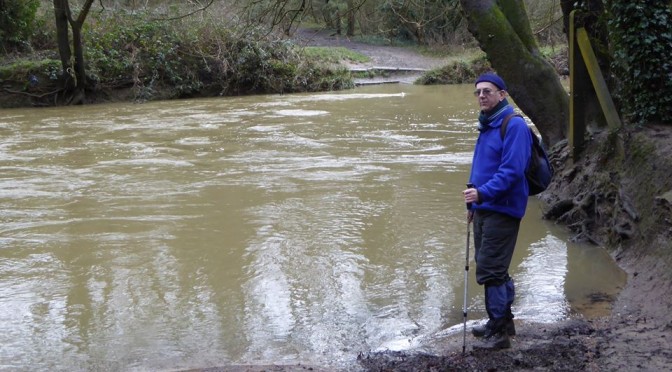 I had been warned of thigh-high lakes of mud, the entire Mole valley being impassably under water & dangerously slippery, steep chalk paths but, despite all these very inauspicious omens, the walk was lovely. We had to bypass the Stepping stones at the bottom of Box Hill as they were under water but there’s a perfectly good bridge not far off so we used that.

We went up the steps to the top of Box Hill, admired the view, sloshed our way through the woods & down again. Some people were a little aghast to see the steps up White Hill (steeper than Box Hill) looming ahead of us, presumably having forgotten that we were really going to earn our lunch. However up we all went & it was worth it as there’s a lovely view near the top & then it was downhill all the way to The Running Horses at Mickleham. The pub did us proud with good local beers & Welsh Rarebit which most people had.

The walk took us back to Leatherhead along the Mole valley which had been flooded but there was only one place where we had to turn back & think again. That turned out to be a good thing as we were forced onto a path next to meadows where 10 or so horses were going nuts with pleasure at the delivery of their teatime hay – all galloping about, kicking up their back legs & generally expressing deep excitement. Then on we went to Leatherhead station & straight on to a train so what could have been a very challenging/frustrating day turned out to be excellent.