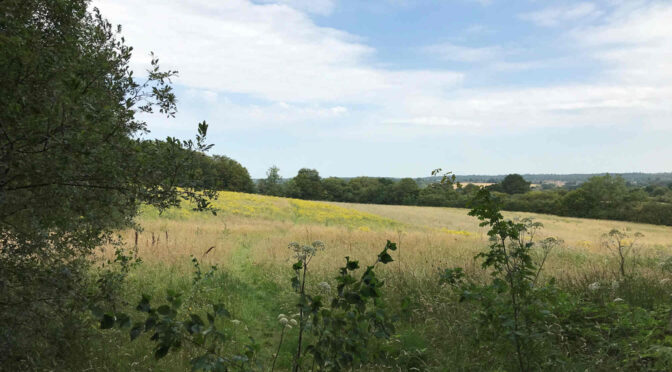 Ten Polyramblers and two leaders met at Brookmans Park station on a very hot day. Ladies were quite envious of Dolly who turned up in a long floaty dress. After a safety briefing and a warning that we would cross the A1 twice (over a bridge), one group led by Tony (roped in to help) left and the second group led by Dominique left five minutes later. We headed west towards the back of the Royal Veterinary College mostly under the cover of hedgerows which shielded us from the heat. We crossed Mimmshall Brook and the A1 and then entered Mymmshall Wood going steadily but gently uphill. At The Grange, we turned north through Hawkshead Wood and, in a field on the hedge of the wood, Dominique’s group met up with the second group who had nearly finished their picnic. They left and made their way to St Mary’s Church in North Mymms and crossed the A1 to reach Water End. They continued to Brookmans Park through fields and a country late and they ended the walk with a drink in The Brookmans. The other group followed the same way but stopped to have a look in St Mary’s churchyard and then had a drink in The Woodman at Water End before walking to Brookmans Park station.