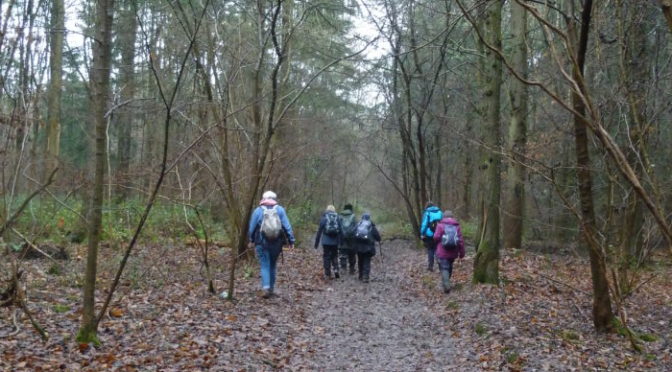 The club was offering two walks on the same day, so a turnout of seven for this the longer one was respectable. The cold snap of the preceding week had given way to much milder weather, though it was somewhat misty as we got off the train at Kings Langley. We had just passed under the M25 before the station so there was a real sense of being in the country, rather than in London. Our route followed the Hertfordshire Way, initially across pleasant undulating farmland and then through woodland. We passed a good few groups of walkers but ours was unusual being dogless. We reached the pleasant village of Bovington, and spurning what looked like quite a nice pub, had lunch in the KS cafe. This is a no frills family run concern where we enjoyed freshly prepared simple food and friendly service. Our leader admitted to having designed the walk around the lunch stop; good choice Peter.

On we went, passing through high end residential developments and a golf club until we reached the Grand Union canal. From here it was a relatively short stretch along the towpath,  reaching Hemel Hempstead in the failing light and just in time for our train.  An excellent walk – thanks Peter for arranging it.

Best wishes for 2017 to all our readers.  Mike Coyle