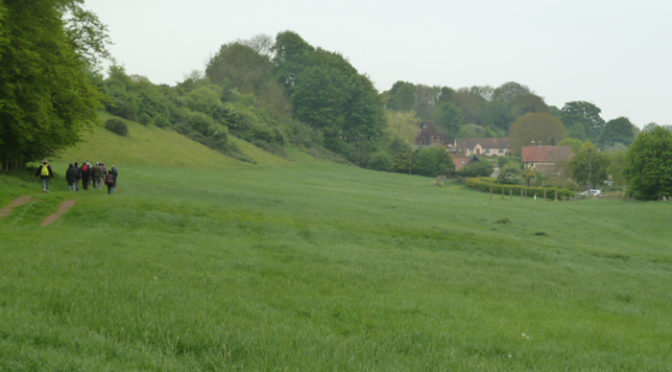 The club has done this walk on a previous occasion but this was my first visit to the Hadhams and what a fine walk it was. We started by taking the 351 bus for a 30 minute white knuckle ride through attractive half timbered villages before alighting at Little Hadham. The weather was overcast but pleasant for walking, with little wind. We passed through undulating farming country, with fields of wheat and oilseed rape. The fields were large, showing how farming has changed in the last 30 years and often our path across a field was clearly a previous boundary. We were struck how dry it was for May, with wide fissures in the ground and empty streambeds. After conversing with a friendly horse, we paused in the pretty 13th century church of St Andrews at Much Hadham and admired its contemporary kneelers. A plaque there commemorates Edmund Tudor,  born in the village and subsequently father to the 1st Tudor king, Henry VII. We soon reached Perry Green where the estate of Henry Moore is now a visitors centre and displays many of his works. We were able to see several of these imposing bronzes from the public footpath. After a lunch stop we carried on to the hamlet of Widford where a herd of lively heifers induced a degree of urgency as we made the steepest ascent of the day. The weather was gradually becoming warmer and we were rewarded with some weak sunshine as we crossed a  field of beans and looked  down on the Lee valley. Descending to Stanstead Abbotts and St Margarets, there was just time for some of us to have a swift half before catching the train. Despite the 10.7 mile advertised length, there was a  turnout of 17. For our regular readers, this included a rare appearance of Mike H – good to see you Mike.

Our thanks to Dominique.