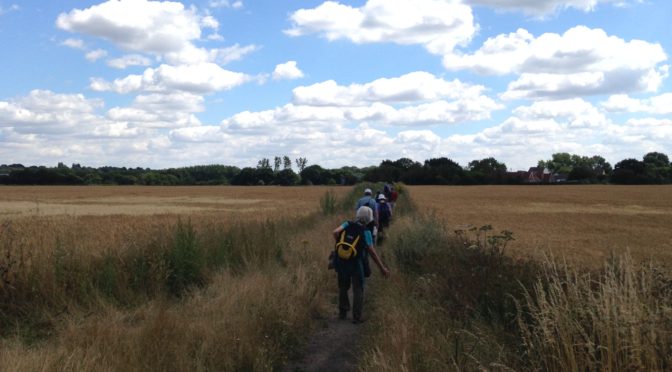 Four of us started the walk with a leisurely coffee while the main group was delayed because of a cancelled train. When we turned up at the station, the other 12 had gone but Danny and Gillian were waiting for us. It was a hot day and it was nice to be in the shade of the Alban way, the former route of the Hatfield to St Albans branch line of the Great Northern Railway. The Line was opened in 1865 for freight and passenger services until it was closed and dismantled in 1969. It is also a popular cycling route and we had to step aside quite often with and without warning to let cyclists pass. We saw St Albans Abbey in the distance, the river Ver and passed a few old railway platforms. We finally caught up with the main group just before the detour to The Plough public house in Sleapshyde where we had a nice lunch in the garden. We were grateful that the afternoon walk was short because it was getting quite hot. We crossed the M1 near the Galleria and finished the walk in Hatfield station which was quite crowded because of the Eastern Electric Festival in Hatfield House. We passed on the festival and headed home.
Dominique