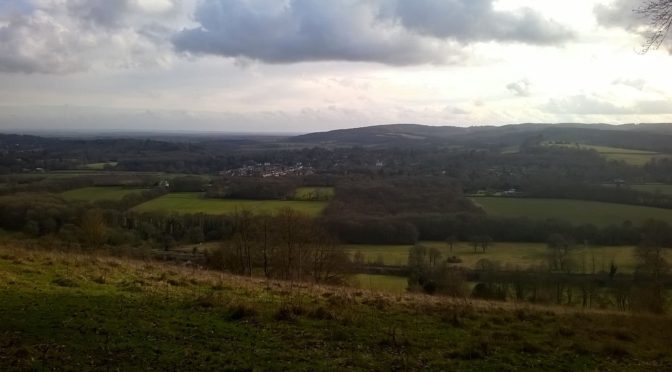 The weather was looking up when we arrived at the lovely old station with its Victorian carvings of fruit and flowers and its pillars, built to impress the travellers of that time. Geoffrey was waiting with boot laces untied, having just arrived by car. A few minutes later, with a quick glance left and right, the broken chair was safely put aside and another enlisted for the job. All laces tied, off we went, most relieved to take a different direction to a large group of teenagers doing their DoE.First stop, a plaque to Fanny Burney, an 18th century novelist whose ‘Camilla’s cottage’ was within. A gradual uphill climb took us to Norbury Park. The large house in the grounds was home to Dr Marie Stopes, pioneer of family planning clinics, until she passed in 1957. Swinging left at a saw mill we carried on to Roaring Hill Farm (see pic) with its lovely old weatherboard barn (+ horse).

On arrival at Polesden Lacey for lunch the group split into two, half racing into the loos to the right, the other half into the national trust café on the left. Good nosh and chat flowing, the hour passed quickly. Ginny had to taxi off home to let some builders in, so we were down to a dozen.

Revitalized we went off down a sunken lane, under a thatched bridge and down Yew Avenue, (see pic- Yew Cottages from the hillside). This took us through the woods on Ranmore common. Our leader announced that we were on the oldest road in England, maybe 5000 years old. Oops that was premature! The oldest road was about 50 yards further along and it was the North Downs Way!

Swinging left on NDW, we passed Denbies’ entrance (no visit to vineyards this time). We enjoyed the great views from the hillside, and Boxhill on the horizon. We dallied at St Barnabas’ Church, built in 1850 with its great spire (nicknamed ‘Cubitt’s finger’ after the builder). Someone remembered a previous group visit when a wedding was taking place inside.

Heading down into Westhumble a church gable came into view (see pic), the remains of a 12th century chapel. Although it had other uses over the years, it met the spiritual needs of many of the workers when the railway was being built in the 19th century.

At last, the final leg of our journey and the station comes into view. A quick glance at a watch, coupled with Sandra’s research on train times, revealed the options available. A 25 min wait for the next train, or a visit to the local pub and a later train? The Stepping Stones PH was busy but many of us were able to sample the T.E.A. and found it much to our liking.