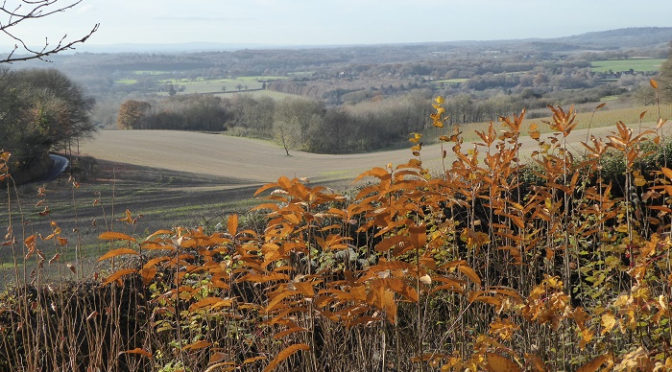 Surprisingly, considering the weather on some walks this November and the forecast earlier in the week, we were blessed with a beautiful sunny day, once the fog had burned off. The ground was squelchy in parts but carpeted with brown and orange leaves. We kept up a good pace in order to get back to the station before nightfall. Sadly two of our star walkers were not able to join us for different reasons, so we were 13!There was a variety of terrain, mostly gently undulating woodland, some arable fields, then Shipbourne Forest, mostly sweet chestnut trees, being coppiced in rotation. I haven’t been able to discover what the wood is used for except for a mention of chestnut fencing. We followed the Weald Way for several kilometres through the trees, with a splendid view to the west from Gover Hill. We passed what had been polytunnels, with a few remaining raspberries and then turned onto the Greensand Way, passing through several apple orchards with lots of windfalls, down to The Kentish Rifleman, a charming 16th century pub, for the lunch stop. The staff had kindly saved us tables for those of us having a light lunch and also for those of our party who had brought their own picnic which they ate outside on the green and then came in for a drink. As we were leaving, after an excellent selection of filled ciabattas or omelette, Sandra noticed a stall outside the pub, piled with bags of local apples to buy at £1 for a bag of 12. Several of us took advantage of the bargain. I can confirm that the apples are delicious!

We set off again at 2pm, up through a small field with some strangely chubby sheep! And then across a field that was bare in September but now covered in a short green plant. Was it winter kale? We soon crossed into the grounds of the Fairlawne Estate. To answer one question which arose as we crossed the grassy expanse of that property: Apparently it is currently owned by the Saudi Arabian horse-breeder, Prince Khalid Abdullah, but there were no animals grazing in the park at this time, not even sheep. According to Wikipedia, in Stuart times the Estate was owned by Sir Henry Vane the Elder but his son, Sir Henry Vane the Younger, swapped sides once too often in the Civil War and was executed as a traitor when Charles II gained the throne. We passed by on the outside of a decorative wall standing on its own but there was not any time to investigate the house itself if we wanted to get back to Borough Green before dark. So we kept up the good pace we had maintained in the morning which meant we couldn’t stop to visit the church at Plaxtol but continued past charming old cottages and larger mansions in their own grounds, through more apple orchards, lamenting how many windfalls lay on the ground. We crossed another field, after spending a few sad minutes observing the machine hacking and tearing (the modern method of pruning) the trees in the lane and rejoined the morning route at Basted. We finished with a rather steep climb to reach the station as the sun set, after making our way through a Christmas fair which had sprung up in the high street while we had been on our walk! There’s an argument for doing the walk again when the days are longer so that we can investigate more. Thank you to all the Polyramblers who came along and joined in the spirit of the day!