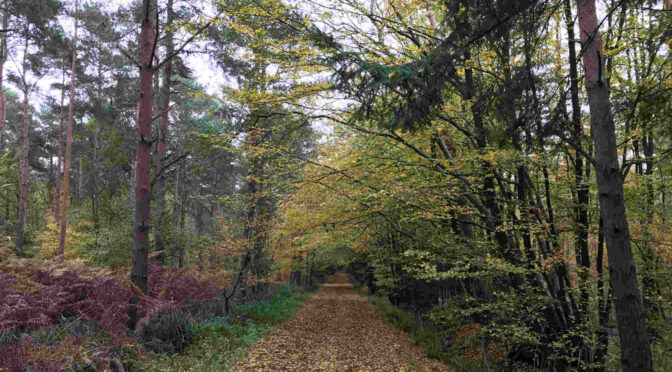 From Bayford station, we walked to the lovely village of Brickendon and followed a wooded footpath northward; we then went south east through Monks Green Farm where a shooting party was getting ready. We entered Broxbourne Woods, Hertfordshire’s only National Nature Reserve, walking along a wide path until we joined the Hertfordshire Way. The woods became a pine forest where we saw lots of different mushrooms. After negotiating a quite muddy path, we stopped for a picnic lunch. We then reached the dinosaurs; thankfully, they were behind a fence! They are a new attraction in Paradise Wildlife Park. I wanted to avoid a field with a horse that had bitten the leader during the recce but he was in the field we were crossing. Thankfully, he did not pay us any attention (we learnt that he had already bitten someone that day). Unfortunately, the oak sculpture trail was closed due to forestry work but we continued through woodland to White Stubbs Lane which we followed for a mile. We stopped to stare at young cattle running in a field and then turned northward along the Chain Walk. We saw an intriguing building looking like a Martian landing craft. But we were reliably informed by Andrew later that it is a vor-dme radio beacon for the use of aircrafts as a navigational aid. We reached Bayford where some of us went to the station and others went for a drink in the Baker Arms. Lucky us, it had stayed dry most of the day.