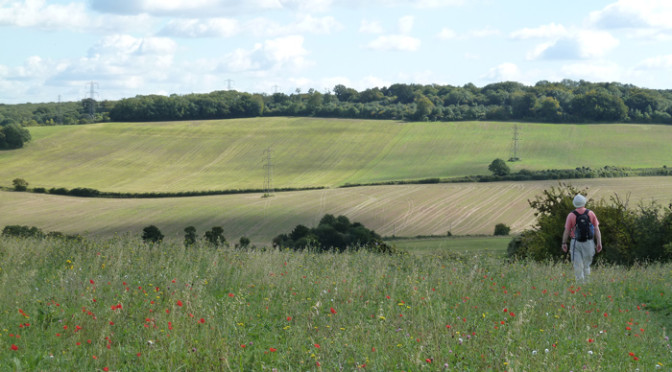 Meeting at Victoria Station – our  9.07 train was platformed early so 5 of us boarded early.  On reaching Sole Street station more of us gathered together on that platform. Kim  & Siew Kee met us, having arrived by car.  On leaving the station a large apple tree was pointed out to me hanging over the road bridge. We proceeded northwards through the village, and after some fields and a lane we reached Owletts – a National Trust manor and formerly the  family home of renowned architect Sir Herbert Baker.  We proceeded along the lane into Cobham leaving on a path southwards by the Church, after a short visit inside it.  Through more fields, this led us down to Henley Street and onwards to Luddesdown where the party came to rest for refreshment at The Cock Inn PH.   It was a quiet spot, warm and sunny,  where we found Barbara had already arrived, enjoying a drink in the sun outside.  So we joined her.

After lunch we set off beside Luddesdown church, south along the Weald Way, as far as Great Buckland.  [Here, we were very close to the North Downs Way path in Horseholders Wood, famed 30 years ago by a party of Polyramblers walking along it (one carrying a radio) on the afternoon of Sunday 7 July 1985,  when a shout of “Becker’s done it!!!” was cried – Boris Becker was the 1st 17 year old ever to win Wimbledon].  From Great Buckland we did a sharp right turn, up and down a lot via  a steep wooded incline after Dene Manor.  Soon after this there was a tricky field without a visible exit.  This caused the party to split into two but we all met up again at the lane at the top. After another mile or so it was a track and a field path back to Sole Street station and we made good time for the 16:00 train back.  As there were a lot of ups and downs I crashed out on the train.  Next thing I knew we had reached Denmark Hill. 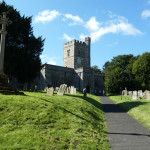 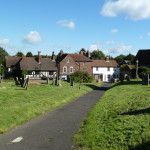 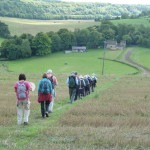 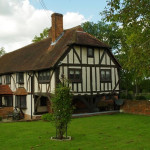 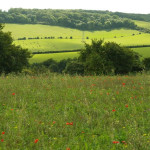 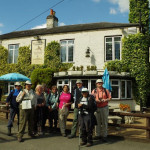 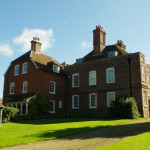