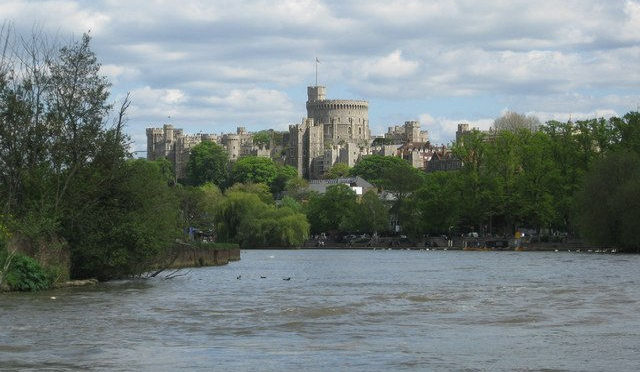 Only three polyramblers boarded the Windsor train so I was hoping a few members would join en route or come on First Great Western. At Windsor four more members joined us,  so not a bad turn out as there was a longer walk scheduled for Sunday. We walked along the river towards Eton Wick and Dorney , where the British rowing team trains.  We went into St Mary Magdalene Church (Friends of the Friendless Churches), by the River in a remote part of Boveney. This church had wooden beams and two very small glass stained windows. This church has been used as a location for Hammer Horror Films by Bray Studios.

We stopped for lunch at a pub called The Pineapple (as the first pineapple was grown here for King Charles) that specialises in doorstopper sandwiches. Even Peter T was beaten by the portion.  The afternoon walk was along the Jubilee River (man made) and had great view of the castle as we returned to Windsor.  Four members decided to stop for tea.

Many thanks Peter for leading this walk. I enjoyed my day out.