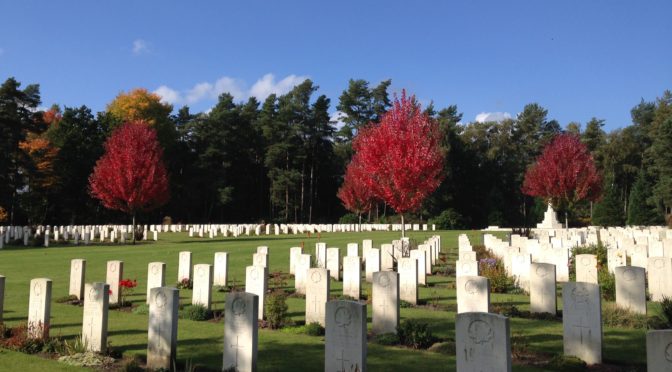 Six Polyramblers arrived at Brookwood station to meet Margaret, our guide, and her husband.  Like last year, Margaret gave us a very informative tour of Brookwood Cemetery, starting with its history .  She pointed out the grave of Zaha Hadid, the well-known architect whose designs include the London Olympic Aquatic Centre.  We then walked through the non-conformist part of the cemetery with Margaret bringing to life (if I may say so) some of the people buried there, by telling us their stories.  We saw some of the 12 graves of men who had been awarded the Victoria Cross.   There are many beautiful trees throughout the cemetery, some over 100 years old.  The sequoias are magnificent.  After walking through grounds that had been allowed to get back to nature, we went to the Military Cemetery which was quite different, very tidy, with nice flower beds and many monuments.  It is the resting place of over 5,000 Commonwealth soldiers and almost 800  soldiers of other nationalities.  We went into the chapel of the American Cemetery whose walls are inscribed with the names of American service personnel who died at sea and have no known grave.  We passed through the Chelsea Pensioners Section and the Canadian Section and, before leaving, we went to the Brookwood 1939-45 Memorial which commemorates nearly 3,500 men and women of the land forces of the Commonwealth who died during the Second World War and have no known grave.

We had lunch at The Cricketers in Pirbright (where Stuart indulged in a pint of Top Totty) before doing a 5 mile walk in farmland, where we saw feral cats and stroked tame sheep.  Most of the walk was through woodland, mainly sweet chestnuts.  We finished the walk on a lovely autumn day with a visit to a final grave in the Pirbright churchyard, that of Stanley (from the ‘Dr Livingstone, I presume’ fame).

Despite not having time to do a proper recce, I did a virtual recce with Google Earth which was quite helpful as I went wrong only a couple of times.