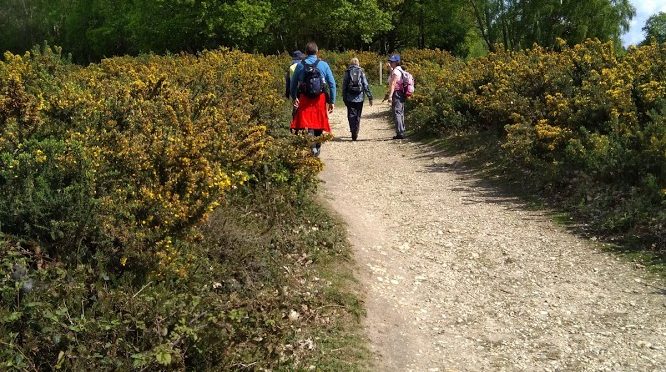 The weather forecast for the day was one of storm and tempest, but apart from a few spots of rain the weather was pleasant with sunny intervals.

The actual walk was one of two halves!  Eleven of us sent off towards the hamlet of Mogador (to see some hobbits!) from Betchworth. This initial part of the walk was to include a steep climb up to the top of the North Downs Way, but a deliberate mistake(!) by the leader led to a more easy ascent with views of the Weald and South Downs in the distance.  With some further adjustments and the use of Stuart’s modern technology we made it to the Sportsman Inn in Mogador where the leader successfully fought off an attempt by several walkers to enter the pub with the promise of another pub nearby!

Unfortunately, the myriad of paths crossing Banstead Common led to the leader selecting an option requiring both old and new technology from Geoffrey, Mike and Stuart to find Walton on the Hill where, after an extra mile, we stopped for lunch and the choice of two pubs.

Two walkers left at this stage to watch rugby and attend a concert.

They say bad luck comes in threes and heading to Headley the concert goer used slightly older modern technology to tell us that a padded jacket had been left in the pub, resulting in Chris having to leave the walk.

The second half of the walk proceeded without incident, although some felt the use of orange topped posts (OTPs) to guide walkers through Headley Heath, with Box Hill in the distance, to be one OTP too far!  The final leg revealed fine views of Reigate Hill and to the surprise of the leader we actually arrived back at Betchworth station in time to catch an earlier than planned train.

Phew! What a day!  Thank you to my fellow walkers who came along.

Photos by Siew Kee and Gillian