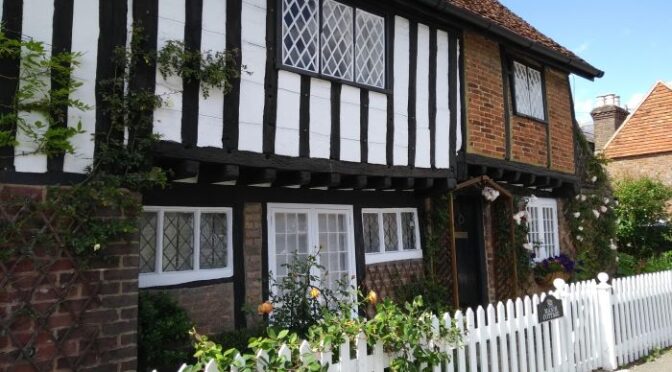 I arrived at Euston early and Geoffrey did too so we were able to have a chat about railways while waiting.  We were a bit late arriving at Berkhamsted, having been held up by a slow train ahead of us.  12 of us set off from Berko, after a further delay while I fiddled with my new pole.  I had been worried about a narrow muddy path on one section of the walk.  However what was muddy in March was bone dry in June and I didn’t need to use my steep alternative route.

We started the steady climb to Berko Common, enjoying extensive views on a bright sunny day.  Although I have done the walk several times I still managed to take a wrong path.  Fortunately I was able to correct my mistake with the aid of my OS Maps app.  I attribute my mistake to the fact that the map shows a path which does not exist on the ground,  and realise that some people might see a slight contradiction here.

After passing through the Alpine meadow without seeing any lizards we reached the flat path through Berko Common.  Here for the first time we encountered some very muddy sections, made worse by bikes and horses.  A long walk through the woods brought us to the steep path down to Aldbury.  Eight walkers chose to have a picnic by the pond while four of us had lunch at the Greyhound.  My steak pie was very tasty but I couldn’t manage all the chips.  One of my dining companions was disappointed that I let the waitress take my plate away before he had a chance to hoover up the chips.

We had only a mile left after leaving Aldbury.  The route took us along a narrow path between tall hedgerows with gaps every now and then which gave us more fine views.  Eventually we joined the path which goes to Ivinghoe Beacon, which many of you are familiar with. When we arrived at Tring station some people took the fast train to Euston while others took the slow train so they could change at Harrow and Wealdstone.  There was some discussion regarding the use of Freedom Passes on that line.  I explained that you could use the Freedom Pass to Watford Junction only if you took the Overground, otherwise the Freedom Pass only takes you to the edge of zone 6, which I think is Harrow and Wealdstone.

To all those who came on the walk, I hope you enjoyed it and thanks to the kind lady who gave me a muffin.