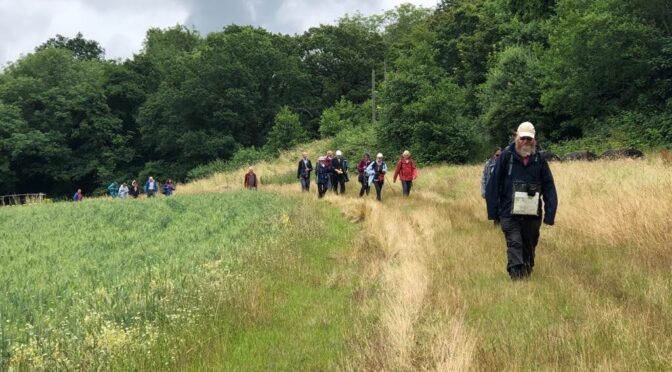 On a drizzly Saturday 10th July 25 polyramblers and guests assembled at Epping station and took the Green Heritage Bus number 339 to North Weald Station. The bus conductor was very friendly and gave a commentary on the journey and we were all issued authentic tickets from his Gibson ticket machine ( Danny is this the right one?). It took many of us back a few years to our younger days. At North Weald we seemed to enter the world of historic re-enactment with all the volunteer officials in period costume, resonant of Wallace and Gromit or Thomas the Tank Engine, to reflect the heyday of the steam train and some of us bought refreshments for the journey or for their lunch. As a bonus we had a quick trip in and out of Epping Forest on a small diesel train before proceeding to the main journey on the shiny black and brass steam train which took us to Chipping Ongar.

We were met at the station by Geoffrey, making our group now 26, and then proceeded on the first leg of our hike to the Kelvedon Secret Nuclear Bunker. After walking through some narrow lanes, passing allotments, we entered a large open field following the River Roding. Unfortunately, the recent wet weather had rendered the going very soggy underfoot with long grass and not a few muddy patches, which pretty much continued until we reached the bunker. The conditions were not improved by some narrow passages, overgrown with nettles d brambles. Needless to say this was not the case when the leaders did the walk over in May, when it had been quite dry, and we apologise for any unexpected slips, trips and mud. The last stretch on the way to the bunker featured an assault course, to put us in post-apocalyptic Mad Max mode. Some children were happy to give us a demonstration in what looked like a rehearsal Lord of the Flies.On arrival at the bunker we realised that the cafe was only available after the tour, so we perched on various walls and logs next to the V2 bomber in the courtyard to eat our lunch. Some of the group then decided to take the bus back back to Ongar, led by Danny and the rest picked up an audio guide at the reception and took the tour of the bunker. The bunker had been constructed in 1953 at the height of the Cold War and was designed to house 600 people, including the Prime Minister and the Cabinet of the day, for 3 months, until it was ‘safe’ to come out! It was a stark reminder of the mindset of the time and the grim reality of nuclear war. The group mood was a little more sombre when we gathered in the canteen and had a cup of tea and paid our tour money into the honesty box. When we emerged the rain had lifted and the sun brightened our mood. At this juncture another few polyramblers chose to take the bus back to Ongar leaving 11 of us to complete the final leg of the walk, which was a pleasant 4 mile stroll on good paths. Due to time constraints we chose a shorter route and did not visit Greensted Church, which will have to feature in a future hike. We got to Ongar just in time for the last bus back to Epping or a lift from Geoffrey for the chosen few. We then made our separate ways by car or public transport. All in all it was a Grand Day Out.