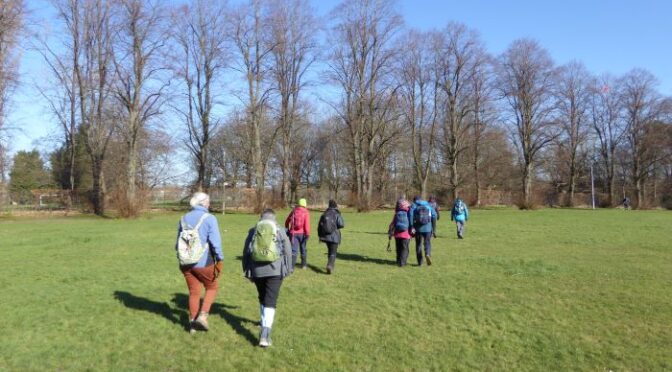 Twenty one Poly Ramblers gathered at Rickmansworth station on a glorious sunny Sunday morning in late February. We started by picking up the Chess Valley path and enjoyed a short stroll along the lovely River Chess at Scotsbridge before crossing the river and leaving it to head uphill towards Croxley Green, passing fields of sheep. From there the route took us uphill towards Chandlers Cross. This section caused some problems on the walkover but today the route seemed obvious and we easily picked up the right path towards Oak Farm and Harrocks Wood.

We reached the busy road at Chandlers Cross with sounds of the M25, sooner than I expected. We made a sharp right turn down a lane and  then into Whippendell Woods. It was just after midday so we decided to stop for our picnic lunch, sitting on logs. The impact of Storm Eunice nine days earlier was obvious with many fallen trees. After lunch we continued through the wood, negotiating several trees blocking our path. The path took us out of the wood and then down Lime Avenue (laid out in the 1700s by Charles Bridgeman, royal gardener to George II) crossing the West Herts golf course, to the Grand Union Canal.  I had received conflicting information on Molly’s Floating Cafe (canal boat). so we were pleased to find it moored by Cassiobury Park bridge and open for business for its final day until April.   After a pleasant break for coffee and watching the boats, three of the group took a shortcut to Watford Met and the rest of us continued on the canal for the final three miles back to our starting point.