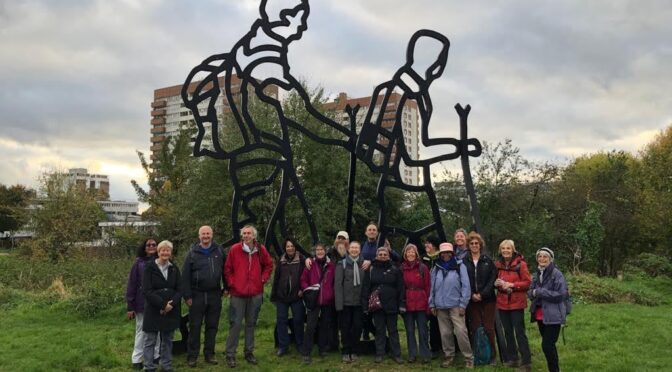 Twenty six Poly Ramblers turned up to the walk despite revised, longer length route. We set off from Richmond Station and soon hit our first alleyway with blue badge building – Suffield House (Hogarth House) on Paradise Road, where Virginia Woolf once lived. We walked through the narrow Vineyard Passage towards the gothic style St. Matthias Church (designed by Sir George G. Scott) before arriving at Richmond Hill Village. The group enjoyed a fine view from the top of the Richmond Hill which is famously captured by Turner in his paintings. On way down to the Thames path, the Statue of Aphrodite (Bulbous Betty) by Alan Howe 1952 attracted much interest from the group.  We also managed to temporarily misplace one rambler in the Hollyhock Cafe!

We crossed Richmond Lock and Weir to the north side of the River to Isleworth after walked through a busy stretch of the Thames path, before an alleyway turn leading to the Elizabeth Butler‘s Almshouses. We then walked through another alleyway to reach Holm Court, where Van Gogh was once a teaching assistant. We viewed a set of well kept Almshouses before we entered Silverhall nature reserve Park and Mill Plat. Two noticeable features at the month of River Crane to River Thames are the Isleworth Flour Mill and a giant crane (used to upload and offload goods from European cargo barges).

Thanks to Danny the group was able to have their lunch at the original stop London Apprentice and picnic by the river. Five ramblers stayed behind to extend their lunch break. We proceeded to Syon Park and soon had a postcard view of Syon House from the path outside the Park. We stopped briefly to admire the lion symbol atop the lion gate of the Percy family (Duke of Northumberland) designed by Robert Adam. We soon came to the Coach and Horses pub, one of few surviving coach road inns. The Inn is mentioned in Charles Dickens ‘Oliver Twist’.

We soon said goodbye to Brentford and moved on towards Osterley. We walked pass the impressive Green Girl School and a Quaker Meeting House, used by the Kidd family. The listed Gillette building was in sight when we walked along the busy A4 Great West Road. Soon we reached Osterley Park entrance near Windmill Lane.

Two miles covered the final section of the walk. We took the foot path outside Osterley Park fields to Heston Community Farm Estate where the Roy Smith ‘Ramblers Sculptures’ are installed. The group was rewarded an amazing sight of two giant ramblers standing tall on a mount, bordered by open fields on one side and high housing on the other. The majority of the group finished their walk at the nearby Osterley tube station.

Photos by Nita,  Ida and Stuart