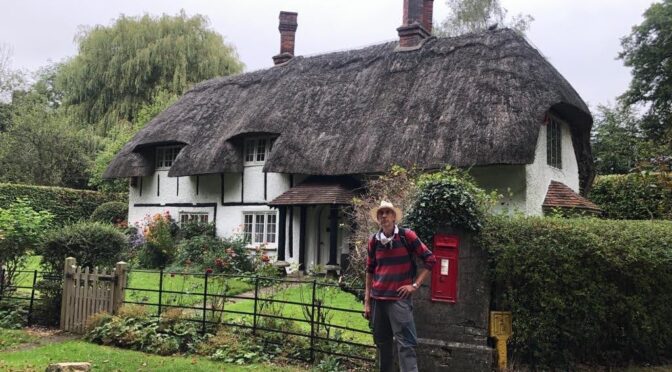 Fifteen walkers and Teddy (the dog) gathered in the Chiltern market town of Princes Risborough on a grey but warm and humid Saturday.  Princes Risborough has medieval origins and my guidebook told me that the under the car park we were standing in was the foundations of the 14th century manor house of Edward the Black Prince.  Disappointingly the group didn’t seem that impressed by this fact.  The first park of the walk took us south through meadows to the hamlets of Horsenden and Saunderton. We diverted to look at the 15th century churchyard in Horsenden.

We managed to cross two single track railway lines without incident, skirted a large, ploughed field with 2 metal detectorists in the middle, successfully negotiated the busy A4010 and headed uphill, eventually reaching the Whip Inn at Lacey Green, our lunch stop.  Food options were limited due to staffing problems but some of us ordered chips and we all enjoyed drinks in the garden.  The Lacey Green Windmill, the oldest surviving smock mill in England, is just behind the pub.   It has timber machinery dating from 1650.  Leaving the pub, we headed across paddocks following the Chiltern Way, and then into woods following the Grims Ditch.  Eventually we took a steep downhill path to emerge from the woods into rolling countryside.  But what was that mass of parked cars on the hillside in front of us? It hadn’t been there on the walkover.  A quick google established that our walk had coincided with the Kop Hill Festival, an annual event in which vintage cars and motorbikes queue to climb Kop Hill, a steep hill (1 in 4 in places) just outside Princes Risborough.  We approached the entrance to the car park and had to be guided through by marshalls.  We paused for a few minutes to watch but some of us found the traffic fumes a bit much and we continued downhill into the town and on to the station. An interesting and unexpected end to a pleasant and not too demanding walk.

Thanks to Ida and Stuart for the photos