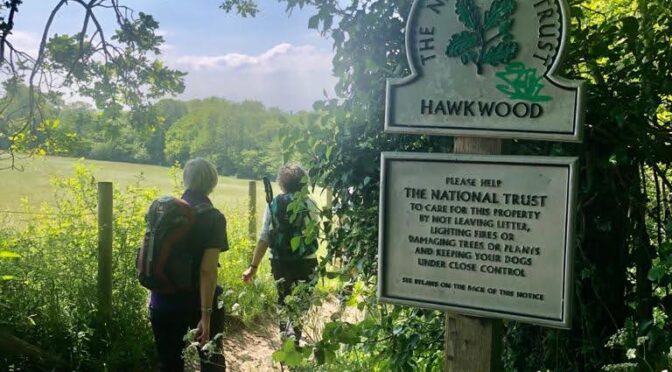 On what promised to be a beautiful, hot sunny day 15 Polys set off from Petts Wood station in South London. After winding through the woods, saved from developers by local people and donated to the National Trust in 1927, we came upon the William Willett memorial sundial. This commemorates his support for the introduction of daylight saving in a pamphlet in 1907 which paved the way for the introduction of BST. We crossed St. Paul’s Cray road and soon entered Scadbury Park, now a nature reserve. We passed the remains of the Tudor manor, first recorded in the thirteenth century and owned for over two hundred years by the Walsingham family. We emerged from the woods and took our lunch break on the outskirts of Chislehurst. While the majority of the party ate their picnic lunch in the grounds of St. Nicholas Church, others visited the café or pub. In the afternoon we passed through St. Paul’s Cray common into the Hawkwood estate, another area saved from developers with private funds and donated to the National Trust in 1957. Here the rolling fields of Tong Farm created a contrast with the pretty woodland as we followed a stream towards three railway bridge crossings and back to Petts Wood station. Four of us stayed for tea and cake at the end of a very pleasant day out, all within the boundary of Greater London.

Thanks to Ida for the photos