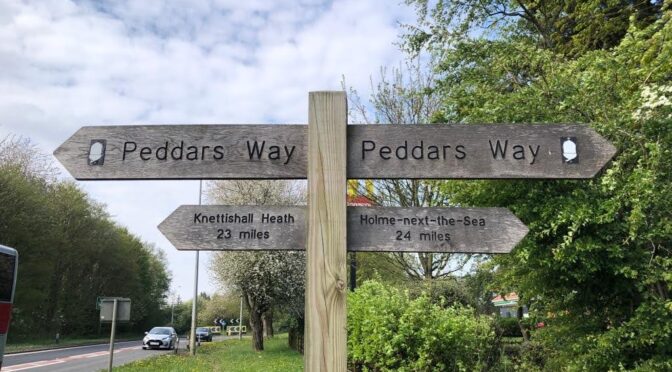 Our weekend adventure formally began in Marriott’s Warehouse, on the historic waterfront of King’s Lynn. My husband Neil’s first introduction to the world of polyrambling at the evening meal was a jolly affair and everyone made him feel welcome as we ate dinner together to fortify us for the challenge ahead.

We had arrived into the town earlier in the day and the Russet House hotel looked comfortable and in a great position near the park. We spent a lovely afternoon exploring the medieval streets and old buildings near the Quay. We popped into the museum to see the Bronze Age timber circle discovered at Holme-next-the-Sea, the very destination of our weekend walk, so that made us even more excited about hiking to that part of the coast.

To start our walk on Saturday morning, we all took a very smart public bus (double decker, with tables) to the town of Swaffham and then rambled 1.8 miles, mainly along a road, to join the trail. At that point the sign pointed 24 miles ahead to Holme-next-the-Sea and 23 miles back to Knettishall Heath. We took the path to the sea.

It was an easy trail, a baked earth path skirting the fields until we saw the village of Castle Acre on the horizon, complete with ruined Priory and ancient church, and pretty river running by. As we walked up the main street towards the portcullis, Stuart was most excited to spot Melbourne House and he felt very at home. We stopped for lunch and as a resting point it had everything – convivial benches under the village sign on the green, an atmospheric pub and a tea room with cakes. (I am not going to mention the antique shop in which I could have lingered for hours.)

An hour or so after lunch, we realised a rucksack had been left behind on a grass verge so the group was split for the rest of the day while steps were retraced and the bag safely retrieved. We then had a choice of routes off the Peddars Way and chose the one that covered more of the trail. This made the journey later from the trail to the bus stop longer but had the advantage of avoiding walking along the road. So under the leadership of Dominique and Geoffrey, we followed the OS map across country as the sun came out, away from the Peddars Way and heading at an increasingly rapid pace for the last bus back, due to leave the village of Gayton at 17.16. We made it with at least 5 minutes to spare, to everyone’s huge relief.

Another group meal followed (Grants restaurant) with apparently enormous portions, while Neil and I nipped off to the beautiful King’s Lynn Minster, for a choral and orchestral evening concert of Durufle and Poulenc, a glorious experience and a wonderful way to end an epic day.

Sunday morning we could hardly move our legs, never having knowingly walked 16 miles before. A generous breakfast at the hotel fortified us, however, and we headed back to the bus station for the only bus on the tarmac, which took us to Dersingham. We walked east to pick up the Peddars Way near Anmer, about 3-4 miles north of where we had left it yesterday. This was a prettier initial route passing colourful fields with hares running, red kites hovering and pheasants shedding their feathers for Stuart to collect.

Once on the trail and into the Sandringham Estate, we passed field after field of enormous pigs enjoying the sunshine and we stopped very close to some metal pig houses to watch them as we ate our picnic lunch. I spotted two battered land rovers on a track ahead and wondered if they contained Royalty as several members of the Windsor family were at Sandringham for the Queen’s birthday. Although sunnier today there was still a stiff breeze and when not sheltered by hedges, it was nicely chilly.
We reached the village of Ringstead mid-afternoon and it was a delightful place to stop and have a drink, before the final push to the coast. We reached Holme-next-the-Sea in good time and bade farewell to the group at the bus stop on the main road. They were heading back to King’s Lynn railway station, and then home.

Neil and I continued down Beach Rd another mile, to see the rolling sand dunes, the enormous expanse of beach and the sea shimmering in the sunlight. It was a beautiful evening and we could see four horses on the horizon, being exercised and galloping through the water. We explored the silent nature reserve and imagined the Seahenge timbers being exposed there at low tide, and the excavations in the mud 20 years ago which revealed the prehistoric burial ground (from 4,000 years ago!). It was a perfect way to end a really lovely weekend, thanks to leaders Gillian and Stuart for organising everything for us and to everyone for their companionship along the way.

Jill Forgham (photos by Ida, Stuart, Jill and others)