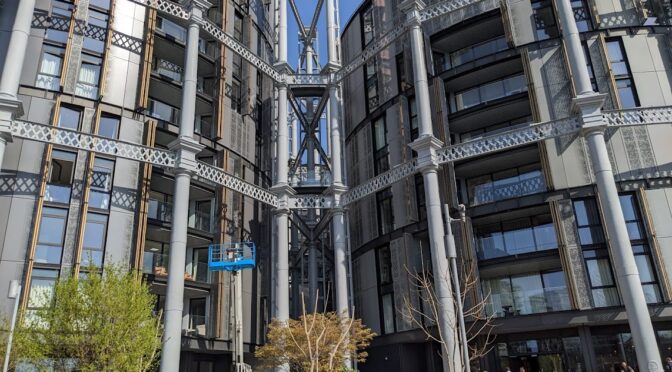 It was a lovely Sunny Sunday with a bit of a breeze. An opportunity for a shortish city walk to counterbalance the Peddars way challenge. We followed the Regent’s Canal from Paddington Basin to Kings Cross with a detour thought Regent’s park and Parliament hill. Vicky and Meng brought friends who enjoyed Polyrambler hospitality. We went via Little Venice. The canal dives into a tunnel at Edgware road so had to go across the top. At Regents Park we detoured round the lake and had a hospitality stop at the Tennis Courts. Then to Regents Park Zoo, outside which found some carved animals had escaped. Parliament hill gave a great view of the City skyline ranging from Docklands, and St Pauls cathedral to Crystal Palace Mast. We dropped down to Regent’s Park Road with the bustling cafe scene. Then down to Camden Lock. We wisely did not venture in as I did not want to lose anyone. There was a opportunity to buy street food in the Market and then following the Canal to Gasholder Park for a spot of Lunch. This was a park in an old Gasometer and was a surprisingly uncrowded spot and very stylishly designed. From there a short walk to Kings Cross where we stopped for final refreshments. Everyone had a great time and I would not be surprised if we had some new members joining.