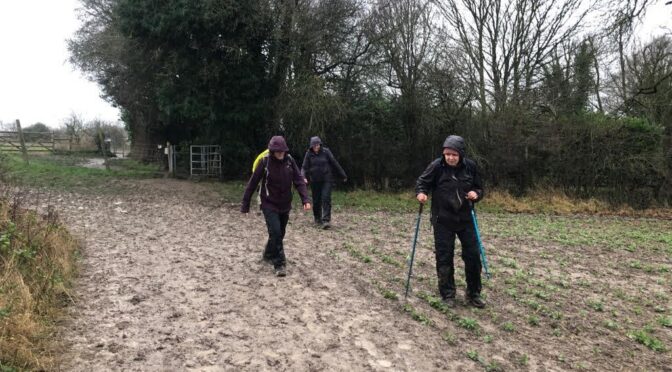 The weather forecast was for heavy rain all day but that didn’t stop 14  Poly Ramblers from meeting outside Otford station for a ramble through the Kent countryside. I was reminded that Poly Ramblers are hardy souls and are very committed to their weekly ramble whatever the weather. It also brought back memories of another occasion years ago when I led the same walk when the snow was falling thick and fast and this didn’t stop the walk from going ahead either.

After a briefing from the walk leader, we set out through a churchyard to the centre of the village of Otford where we made a diversion to look at the ruins of a sixteenth century archbishop’s palace frequented by Henry VIII and his court. The walk continued around an old village pond complete with duck house until a footpath led us away from a busy road to run alongside the river Darent. The leaders had chosen this path thinking it would be a less muddy alternative than the usual route, but it also proved to be extremely muddy and slippery as it wound its way across fields eventually meeting a golf course. From here we turned down towards a road which led us to a path up the first of our steep climbs. Unfortunately, the sky was so thick with mist and rain, we were not rewarded with the normally splendid view that there is at the top of this hill. However, what goes up has to come down as the saying goes and the path down into Shoreham village was steep and slippery and had to be managed with care. Shoreham is a pretty characterful village with the river Darent running through the middle. The group divided up with some people going for lunch at the Kings Arms and the remainder who had brought their own lunch to the Honeypot Cafe where the owner kindly allowed them to eat their own lunches undercover from the rain. It hadn’t stopped raining all morning, so we were glad of a respite inside somewhere dry and warm. The heaviest of the rain came down whilst we were at lunch as we could hear it beating down on the marquee rooftop at the Kings Arms.

After a good meal and friendly service, we were ready to face the elements again. The puddles outside had grown even bigger and it was still raining but everyone was still committed to finishing the walk! The afternoon walk continued along the river Darent, passed Samuel Palmer’s beautiful Georgian manor house (a nineteenth century English landscape painter), up another steep hill and eventually into a wood from where we emerged on to another golf course. The golf course had a lovely open aspect to it and from here we walked downhill to reach the gatehouse of the sixteenth century Lullingstone Castle which has been owned by the Hart Dyke family for centuries. Within the grounds which are open to the public in the summer is a World Garden containing plants from all corners of the globe. The owner apparently hatched the plan for the garden whilst he was a hostage of a terror group in Colombia. From the castle, the path continued along a tarmac lane passed an English Heritage site containing the remains and mosaics of Lullingstone Roman Villa. We didn’t have time to stop and go inside, but instead continued with our walk along the lane passing under a high nineteenth century railway viaduct. Eventually we reached the village of Eynsford with its old packhorse bridge and ford. At this point, the group disbanded, with half deciding to go into the Riverside Tea Room for tea and cake and the remainder hot footing it up the main road to Eynsford station for the train back into London.

Despite this being one of the wettest and muddiest rambles I can remember, spirits had been high and all in all it had been a very enjoyable day out.