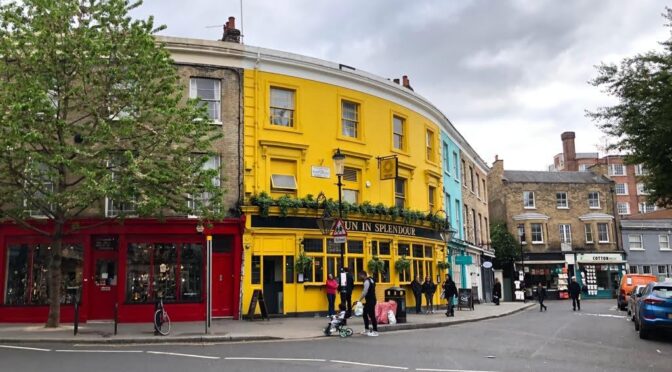 What was the Hippodrome Racecourse , potteries and piggeries in a notorious slum area, is now a world-known neighbourhood with beautiful and colourful houses alongside council estates.  Notting Hill Gate is known for its carnival, Hugh Grant film and the Portobello Road market which began in the 1860/70s.  Ten of us set off from Notting Hill Gate tube station to explore the area.  From Pembridge Gardens, we went to Portobello Road.  The beginning of the road is lined with very pretty, colourful houses with nice front gardens.  We passed a few mews, but their entrance was not as impressive as the arched entrance to Pencombe Mews.  We made a pit stop in the purpose-built toilets in Westbourne Grove then headed towards All Saints Notting Hill & St Michael’s North Kensington.  The church has an interesting history and the Reverend Dr Samuel Walker who began its build, had very ambitious plans, intending to crown the tower with a spire as lofty as that of Salisbury Cathedral.  The marshy ground put a stop to his plans.  We would see this church a few more times on the walk to the amusement of the walkers.  We continued towards the Tabernacle – a Grade II-listed building built in 1887 as a church – and Vicky persuaded us to go in.  We received a warm welcome from two QPR and Fulham supporters who told us about the history of the church and its impact on the community and the carnival.  We passed the Ledbury but did not stop for dinner (tasting menu £185 and matching wines £120).  We headed towards Elgin crescent.  As we walked west along this street, the houses became more luxurious.  We went up and then down as we were in a hilly area, passing the street where Andrew used to live as a child and continued towards Portobello Road, passing the blue door from the film Notting Hill.  Then I got mixed up and, as it was getting late, we headed towards Westbourne Park tube station where the walk finished.  Five of us went in search of food. We were walking along a small industrial estate when we saw the words ‘Restaurant’ and ‘Bar’ and a few people outside one of the units.  We were told to come in and did not know what to expect but people at the Portuguese Sporting Clube de Londres welcomed us with open arms and we had an excellent meal accompanied by three nice bottles of wine.