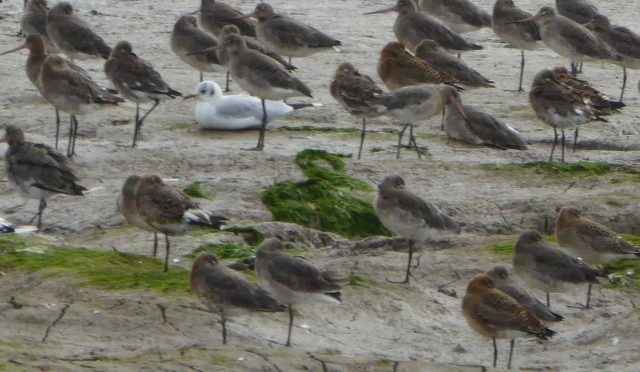 Eleven polys arrived at Fambridge North on the Dengie Peninsula on a rather grey but mild morning. We soon arrived at the sea wall on the River Crouch. We walked along the meandering river with its several creeks, remarking on the tranquillity of our surroundings and the beautiful views on both sides. Being tidal, the river attracts various wading birds. We were a little too early in the year for those which winter in the area but we did see some geese in flight. It was quite windy at times, so we were pleased to find a sheltered spot just before Creeksea for our picnic. The clouds finally cleared and the sun came out as we continued into Burnham on Sea, walking through the large marina and onto the quay. We spotted some birds on the mud flat but could not identify them. Later Pam informed me that she could ‘confirm that we saw a pied wagtail (grey and white) hopping around and wagging his tail on the seaweed on the rocks and my contacts have confirmed that the flock of birds we saw sitting on the mud as we approached Burnham on Crouch definitely look like black-tailed godwits – see photo. The white bird with the black dot on his ear in the middle of the flock is a black-headed gull in winter plumage.’ At least the wagtail wags his tail! We enjoyed tea, cake and ice cream sitting overlooking the estuary. As we returned to London we agreed that it had been a very pleasant relaxing walk, perfect after the exertions undertaken by those who had attended the Chester weekend.