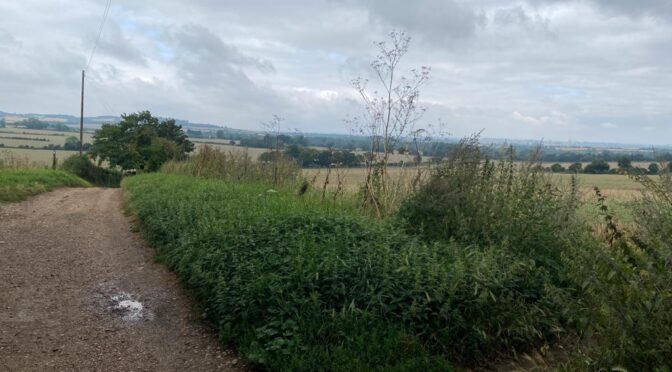 A small band of sisters and one brother met on Sunday – gathering at Hitchin library which is more or less where this walk starts. The ‘HOOP’, seemingly named after a 70s rock band, is apparently part of a group of walks, including the ‘STOOP’ (around Stevenage) and the ‘LOOP’ (around Luton). As it was my first attempt at co- leading a walk perhaps it was a good thing it was a small and forgiving group of veterans. The weather was pretty good for walking on the whole although sharp but heavy showers along the way resulted in much putting on and taking off of macs and the occasional waterproof trousers. Walking from the library out into the countryside in unremarkable suburbia, it is a relief to suddenly find the road opens up into a wide panorama over the the Chiltern hills, where Hitchin stands on the edge. Our emergence into open fields was punctuated by an overhead buzzard which it turns out are fairly common in the Chilterns along with the red kites. We made our way from here through open meadows – no breathtaking views but very still and peaceful – we met few others apart from occasional dog walkers. Most of the walk is in open countryside or the outskirts of Hitchin, but we made our way through a wood next to the River Hiz before hitting the fields again. We reached Oughtonhead nature reserve, now a wetlands, where had we had the time, we might have seen kingfishers and water voles. From here, now stepping up the pace as it was approaching grub time, we reached the village of Ickleford. Ickleford apparently has three pubs for a population of 1800 but we could only find one – the Plume and Feathers, with a large green opposite, where we picnicked. Being in a leisurely frame of mind, we decided to have a drink in the pub garden after lunch, (despite a rather tetchy landlady who seemed to resent having any customers at all) and relaxed in unexpected sun.

There are lavender fields near Ickleford which it might have been nice to visit, but we thought we caught sight of them later, walking along the Greenway, a walking route around Letchworth created as part of the ‘garden city’ concept. Onwards to Charlton, a hamlet mentioned in the Domesday book, a long stretch along the Greenway itself and through various suburban parts of Hitchin, until we hit Hitchin old town. Hitchin was apparently the centre of the Hicce tribe in the 500s – who knew?

Thanks to Hilary we found the right turning into the town centre and the delightful market square, vaguely continental with cafes scattered around it – usually buzzing but quiet and deserted on a late and wettish Sunday afternoon. From here, several left to catch the train home, 3 of us settling down in the remaining caff for a drink.

A good day, great company, and thanks to the stalwarts who joined Mary and me!

Thanks to co-leader Mary for the photos