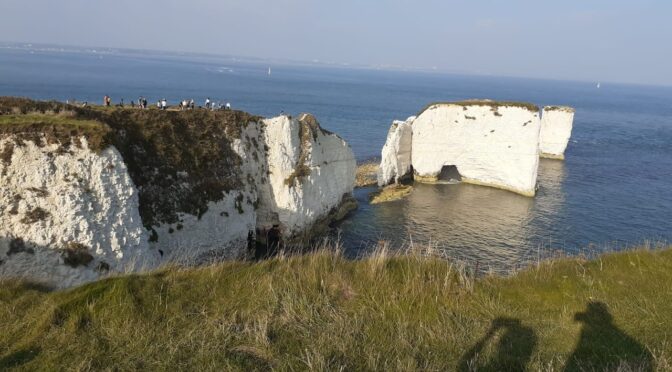 Geoffrey had the honour of leading a walk on his birthday!

Some 17 Poly Ramblers gathered at Swanage bus station to catch the 10am bus to Corfe Castle village. The weather was bright overcast. We all alighted in East Street and walked towards the centre of the village, passing a square beside a church with a view of the castle on a green mound behind. Continuing downhill where the main road continues through a narrow gap, we took a right turn Eastwards along a narrow lane passing under the Swanage railway, where we started to go uphill. At this point we had a photoshoot, as looking back, there was a spooky dramatic view of the ruined castle rising up over the rail bridge in the mist. After 200yds or so, at Challow Farm we joined the Purbeck Way track gradually climbing up further east, past a mast onto the ridge at Rollington Hill. As the ridge continued, taking us over Brenscombe Hill, the mist started to clear, offering us to our left, good views of Poole Harbour in the distance with areas of heathland and woods in the foreground. To our right, a green valley of farmland with the occasional sound of a steam engine whistle. Now we were on Nine Barrow Down, where some 3 miles or so from Corfe, our track started to descend into a valley between Round Down and Godlingston Hill, onto a busy lane where we turned North and took a North path up Dean Hill to cross the B3351onto another heathy path. This heathy path stayed flat and took us Eastward into Studland.

In Studland we needed to find Joe’s café, our proposed lunch spot on the coast. With no previous walkover, this was not an easy find. However I enlisted Susan’s help with her familiarity of the area being better than mine! About 45mins later we arrived there at the beach, the café being an isolated shed with an open counter and a terrace of picnic tables. It provided us with snacks and drinks.  Loos there were none, we had to improvise!

From here we could continue south, past wooden beachhuts to join the South Western Coast Path; keeping the sea to our left, this took us eastwards for a mile, along the only part of North Coast in Dorset I know! Then we reached a large grassy opening of common land on the clifftop, the path taking us to Handfast Point where we saw Old Harry Rocks. This area was very popular with lots of visitors. The chalk of the rocks striking very bright in the afternoon sunshine, made it a popular photo shot. The sea was 3/4 of the way around us, with views of Poole Harbour. However, no views of the Needles or Isle of Wight, being lost in distant sea mist  (we did see them the next day). We met up here with Raj, and spent some time taking photos. The rest of the walk, some 2.5 miles, took us further along the coastal path via Ballard Point, around Swanage Bay into Swanage, where along the beach we had to negotiate several groynes. At a concreted area several ladies in the party decided to rest, so I encouraged them to up and continue, as tea and birthday cake were looming at the Hostel where the walk ended, within the next mile.

The cakes were delicious. Thank you Hilary for the lovely almond cake and to Poly Ramblers for my birthday card.

Photos by Ida, Stuart and Geoffrey