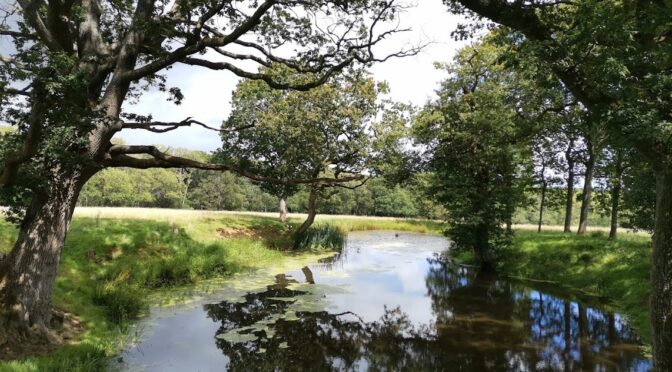 Twelve walkers gathered at Hever station where minutes before the leader had managed to drop his map on the railway line. Siew Kee gallantly threw herself onto the tracks to rescue said map (I’m sure that’s not in line with our H&S policy – Editor!) and somehow Siew Tin and leader managed to pull her back up onto the platform! The first section of the walk was very wet and the heavens opened several times before leaving us with a relatively dry day. We passed the picturesque Christmas Mill pond and headed up a gradual slope to Dry Hill, the site of a former iron age fort. The descent provided some nice views of the North Downs. Another slight ascent took us to the picnic spot under some oak trees and between two large ponds.

We then headed for The Fountain pub passing Waystrode Manor, a timbered Tudor manor, which provided a great photo opportunity. Suitably refreshed we headed towards Markbeech and onto Hever station through some very muddy and overgrown footpaths. The leader armed with his trusty secateurs managed to cut many thorny brambles back, but did not hear Geoffrey screams when he was attached by one particular bush. Sorry Geoffrey!