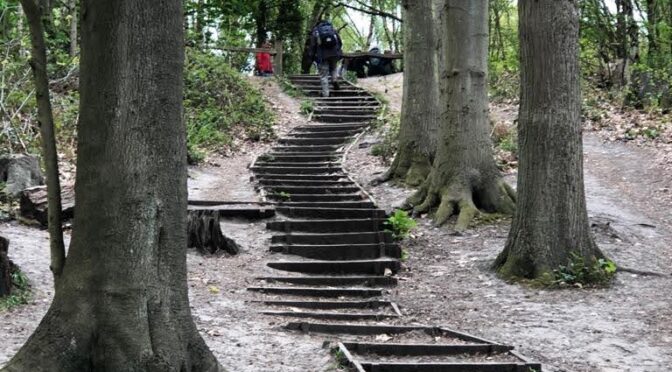 Ten Polys and the leader set off from Hampton Court station on a bank holiday Monday which promised gales and rain! The leader was so busy chatting that we missed a turning but quickly returned on our tracks and passed the quaint Bell Inn (1550) with its crooked architecture. The first part of the walk took us along the Mole and Ember rivers and across Molesey Heath. Here we missed some steps but we were helped by Stephen’s OS map app which saved the leader from having to get the paper version out! By the time we arrived at West End, the sky was looking ominous. We ate our picnic lunches on the pretty green and visited the facilities at Garson’s farm shop. It was a little chilly so nobody fancied an ice cream from the van on the green and we moved on. The second half of the walk took us through woods alongside the River Mole until we turned off onto Oxshott Heath, passing the picturesque Black Pond. We emerged from the woods directly in front of Oxshott station. We congratulated ourselves on finishing before the rain started. We did a little more than the original distance, due to the odd detour, but it was altogether an enjoyable walk with varied scenery and wildlife. Thanks to Kim for the information on the flowers along the route and to Ida and Meng for the lovely photos.