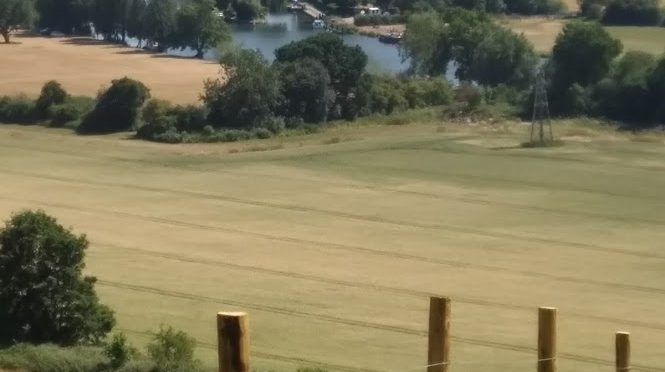 It was a hot day to walk 13 miles with no pub until the end but that didn’t deter 11 Poly Ramblers. Led by Jackie, we started at Goring and were soon heading uphill through woods to arrive on a ridge.  Much of the walk was in woodland, which was just as well as the sun was roasting out in the open.  Stuart had intended to do a shorter, lower level walk but we kept bumping into him around every corner so in the end he stuck with us.  After a nervy encounter with a frisky group of young heifers we were back in woodland and stopped in partial shade to eat our sandwich lunch.  We had a lovely surprise when Geoffrey produced a bottle of prosecco to celebrate his first 40 years in the Club.  Congratulations Geoffrey and hope you have many more years of walking.  Continuing on we came to a clearing with lovely views of the Thames below, the first we had seen of it all day.  We headed steeply downhill, towards the river we thought, but no, we were soon going back uphill until we reached the village of Whitchurch on the Hill.  Jackie googled for a possible icecream shop but in vain.  We continued downhill and before too long we were on the outskirts of Whitchurch on Thames where we found our first pub of the day.  Most of us decided to stop for a refreshing drink before crossing the river at the Toll Bridge into Pangbourne and the train.