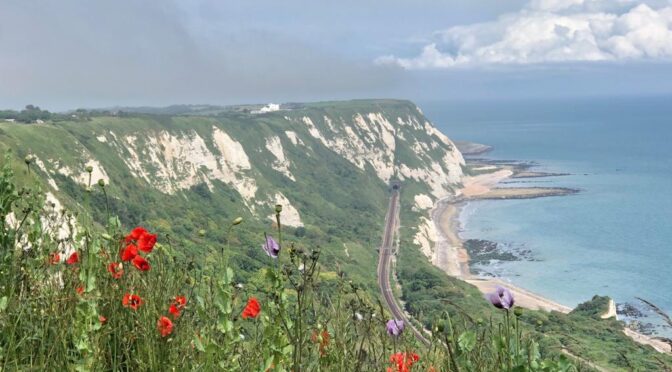 A  different group (including myself) of Polyramblers originally walked this ramble back in October 1985, a photo of which captures that event on the front cover of the club’s history book ‘Walking through the Years’.  By popular demand I was asked to repeat this walk. So I chose a Sunday with no apparent trackwork on the rail timetable.
This time I walked into my local station (then unstaffed)at 0740, to leave plenty of time to meet Polyramblers at St Pancras for the 0937 to Folkestone. A man rushed out of the barriers saying there were NO TRAINS!   Indeed the 1st train was showing cancelled on the screens, but the next, at 0816 to be on time. I thought I should be OK on that. However, at 0800, it also changed to cancelled, with no prospect of anything else leaving until 0916!
It was quite clear now that I wasn’t going to reach the 0937 at St P, leaving the group high and dry there. My natural reaction, I sent a whatsapp message from the Polyramblers social group, stating ‘unable to reach 0937, hoping to reach the 1037’, if they  could wait. By 0815 the booking hall clerk appeared, rather harrassed, and at 0830 ordered a taxi for me and 2 others for St Pancras Station. It didn’t turn up till 0905, by which time we sped out of town and onto the M1 despite the driver nearly missing the M1 turning!  At the Luton area the heavens opened and I could see more splashy water than motorway ahead. One passenger asked the driver not to drive so fast as he wanted to arrive in one piece. By 1000 we were passing the London Zoo and I eventually stepped into St P around 1010, to the joyous faces of the polyramblers group inside.
The ramble was thus conducted an hour later than planned. One member stayed the night before in Folkestone, and another travelled on the 0937, both waiting 1 hour for the rest of us at Folkestone West station.
By 11.30 we were all gathered together here and the ramble proceeded, northwards out of town then across a busy motorway junction(not there in 1985), then up a wooded lane climbing over the Channel Tunnel portal,  onto the Downs where we joined the North Downs Way at the top. The sun miraculously started to shine. From here the direction is generally eastwards, as we circumnavigated Caesar’s camp on Castle Hill.  To the south is a splendid view of Folkestone and the English Channel spread out below us.  France and Dungeness Point also visible in the distance. To the west, below us,  we saw the huge channel tunnel vehicle/freight terminal and the international  high speed railway which comes out of the tunnel from France (also not there in 1985).
The walk continued along the top of the downs, passing Round Hill up to the Canterbury Road, then along the top of  Creteway Down, Dover Hill until we reached The Valiant Sailor PH stopping about 30 mins for a liquid refreshment. Continuing for less than a mile we reached the Battle of Britian Memorial site, a large grassy area, with a building shaped like plane wings. As there was an event with dignitaries happening at the building we were unable to use their refreshment facilities. There was a marshall at each end of the site where the NDW entered and left the site. But one of them advised we could sit and picnic on the edge of the lawn, so we did.
Having lunched we progressed westwards along the clifftop negotiating steps down to Steady Hole then more steps up.  Then through The Warren which is the clifftop path passing Capel-le-Ferne. We soon came across a refreshment room with outside terraced seating overlooking the sea, where we stopped in the sun for tea/coffee, cake, and/ or Magnum ice cream. From here there were views eastwards down the cliff showing a railway line passing into the cliffs. By now, France in the sunshine looked even clearer still. Then my phone pinged with ‘Welcome to France’ !!
The last stage took us along Abbotts Cliff, passing Lydden Spout where no longer the MOD practise on an old firing range (they did in 1985).  Also  below us (not there in 1985) we passed an area of reclaimed land built into the sea known as Samphire Hoe Country Park. It is believed that this was built using the spoil taken from the Channel Tunnel construction. After climbing Shakespeare Cliff, we reached the outskirts of Dover, and unlike 1985 where we simply followed the cliff path onto a level B road leading us past the Western Docks,  we now had to negotiate a footbridge across the A20 dual carriageway, then through a housing estate where the path then climbed through long grass up Western Heights onto another higher road. At this point we left the NDW as it would continue higher up to Drop Redoubt.  We simply stayed on the road which gradually descended, until we found some steps leading down to a lower road which took us to Dover Priory Station.
Our train, the 1849 hi speed Javelin appeared on time, and rain started to fall as we boarded. In no time at all we were speeding back to London and reached St Pancras before 8pm.
I must say how impressed I am with HS1 which makes Folkestone and Dover feel nearer to London. And I would like to say a big thank you to my party who waited patiently for my arrival in London that morning.
Geoffrey
Photos from Geoffrey and Ida