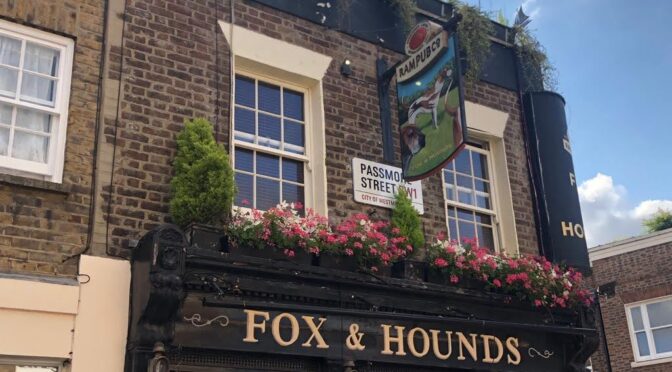 The weather stayed dry for 18 Polyramblers during our evening walk in Belgravia, a 200 acres area owned by the Grosvenor family since 1677. At that time, it was known at the Five Fields – a mix of swamp, pasture, orchards, a few scattered houses and much of it the haunt of highwaymen. How things have changed! It is now one of the most fashionable and desirable residential areas of central London and the largest and best-preserved urban Regency estate. After leaving the bustle of Sloane Square, we were soon in quiet Bourne Street where we had a sneaky look at the church of St Mary. We passed the first of seven small hidden pubs on our route, all known to Danny of course, except for the last one.

We walked past Lumley flats, ‘model dwellings’ built in 1875 at the instigation of the 1st Duke of Westminster to house the poor in the 19th century. We paused at Orange Square by the statue of Mozart as a child who lived in Ebury Street for a year while on a grand tour of Europe with his father. In Gerald Road, we saw Noel Coward’s home and walked to Chester Square recently voted London’s second-best house address, the first being Eaton Square which we reached soon after. We went into Eaton Mews North, one of the mews which were the home of the horses and servants of the people living in the elegant squares, but which are now worth over £1m. Next was Belgrave Square which mainly houses embassies and offices with only a few residential homes. We walked around the square passing the statue of Simon Bolivar and the statue in homage to Leonardo The Vitruvian Man. We reached busy Motcomb Street with the impressive Pantechnicon with its Doric columns which was built as a storage warehouse. We went along quiet Kinnerton Street and the impressive Wilton Crescent before ending at the Grenadier Pub in lovely Wilton Row. There half the group went home, and the other half had a drink and a bite to eat outside the pub. Danny can now say he has been to all the pubs on this walk.

If you want to redo the walk, here is the link to the route: