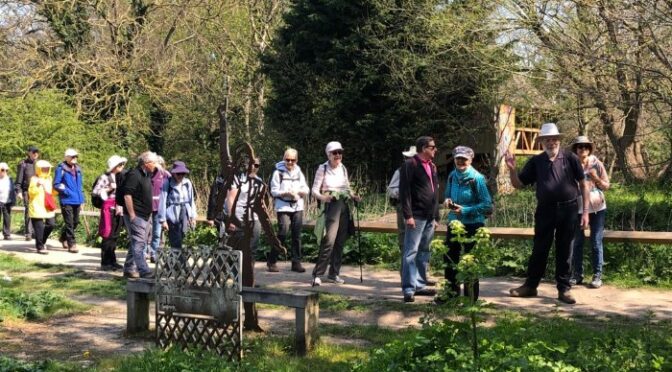 On a warm and sunny Easter Saturday, twenty members met at Dartford Station for a seven mile walk alongside the River Darenth to Farningham. Before leaving the station, we looked at the plaque on Platform 2 which commemorates the meeting there of Mick Jagger & Keith Richard in October 1961 which led to the formation of the Rolling Stones. We then joined the river for a short distance before wending our way through the town centre to the Wat Tyler pub where the Peasant’s Revolt leader drank during his march on London in 1381. A stroll then through the pleasant Central Park brought us back to the riverside and its sparkling waters in the Spring sunshine. We passed an artwork of Mick Jagger who was born in Dartford in 1943 and then skirted Brooklands Lakes with numerous anglers hoping for a catch. We stopped at the Chequers pub in Darenth to look at the ‘Only Fools & Horses’ display in the garden but it was too early to stop for lunch.

This was taken in South Darenth where half the group sampled the fare at the Jolly Miller pub whilst the other half picnicked in the sunshine by the former paper mill with its fine Italianate chimney. Suitably fortified, we passed under the magnificent ten-arched railway viaduct some twenty metres high before re-joining the river. The final stretch brought us past fields with horses & emus in residence and a bridge where a pony was being washed in the waters below. We reached Farningham by the Lion Hotel once-visited by Charles Dickens whilst trout fishing by the adjacent Folly Bridge, constructed in the 1700s to stop cattle wandering downstream whilst crossing the ford. Easter eggs were then distributed before the last bus of the day arrived on time to take us to Swanley and a train back to London. Photographs courtesy of Melida, Ida and Mary