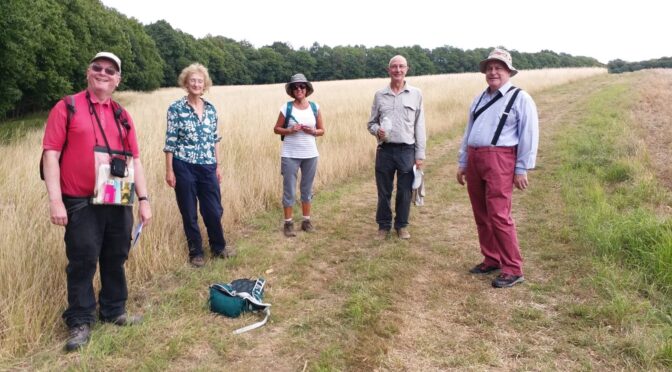 Six Polys arrived in Downe by various means.  The most privileged being Melida who was chauffeured by her daughter.

We set off from Downe going past the unseasonably named Xmas Tree Farm and on through Downe Bank nature reserve. The walk had a quite variable in terrain with a mixture of undulating meadows and woods.  We continued to our picnic stop at the 11th century Knockholt church being constantly buzzed by two Spitfires flying out from the nearby Biggin Hill aerodrome.

The next stage was to reach the oasis of the Old Jail pub at Berry’s Green.  A minor delay occurred when we missed a fingerpost hidden in a tall hedge.  Fortunately, the ever alert leader spotted we had overshot our turnoff and only a couple of minutes was spent returning to the fingerpost where upon Geoffrey exclaimed, “how is anybody meant to see that!”.

The heat began to take its toll and signposts saying Berry’s Green was ever closer began to be doubted by the group.  Even the leader didn’t believe himself when he kept saying, “it’s not far now”.  Woodland brought relief from the heat, but the meadows bleached your bones dry!

Finally, we arrived at the pub and a déjà vu moment of the ending to “Ice Cold in Alex”!  The leader generously bought everybody a drink in celebration of a former OAP age!  The Government having moved the goalposts!

The final stage led us past Darwin’s Downe House, and some donkeys spending Christmas at the farm and to Downe itself where we said our goodbyes.