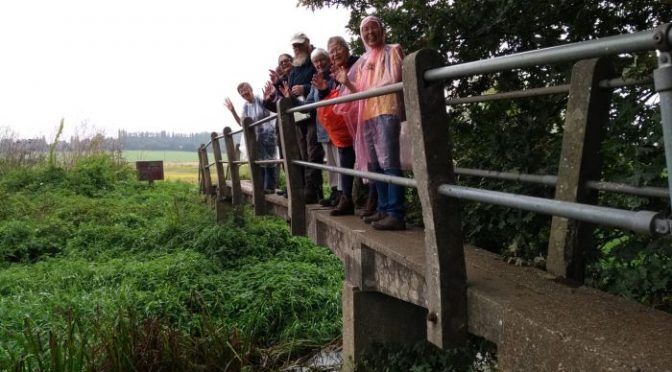 Danny having been incapacitated by a leg injury, I volunteered to stand in for him to lead this walk. I went on a walkover the Sunday before. Just as well. There were places on the walk description (printed in 1994) that were rather elliptical not to say misleading, starting with inclusion of the word “stroll”! It all went fairly smoothly at the beginning. I stopped in the village of Abridge for a lime and soda and chat to a customer about local history, discovering that the spirit of Dick Turpin is alive and kicking! The description matched the reality, despite the occasional lack of waymarkers or other signposts, or overgrown brambles, until I was misdirected through a very overgrown series of field margins in search of a footbridge over the so-called River Roding (which at that point was more like a wide watery ditch). The worst was a field of waist-high thistles, nettles and brambles which I got out of with difficulty. It was all so undesirable that I couldn’t put my prospective group through the same sequence of obstacles, so I did a second walkover with Harriet. We found the intended footbridge over the River Roding and pruned brambles with our secateurs where necessary. We were impressed by the distant spotlit view of the City of London from the brow of Theydon Bois Wood (Theydon Wood Wood?).

On the walk itself, we were greeted by a sunny morning when the forecast was for torrential rain and the risk of flooding! When we reached Abridge, three of us opted for a coffee in the friendly Deli rather than Dick Turpin’s pub and the others made their way to the lunch bench, discovering behind the hedge a children’s playground with more benches and less nettles. Then onwards to a field to be greeted in an off-hand way by a flock of many-coloured alpacas, which posed haughtily for photos. The typical Essex weatherboarded church at Lambourne deserved a longer visit – all the memorials to the local gentry, their exploits and achievements. The next challenge was the Great Wood where the footpath was converted into a tunnel by brambles. We took the easier option and skirted the wood, meeting a lady with her two dogs that I had met the week before when she kindly pointed me in the right direction, today exchanging cheerful greetings. At some stage drizzle had made us get out the brollies, ponchos and anoraks. This time we crossed the correct bridge and made our way beside the black waters of the River Roding (no sign of chub or fishermen), through long wet grass at the margin of several fields, over several small footbridges, one protected by waist-high bars requiring athleticism or long legs! One of the fields contained two horses which seemed to run away as they saw us coming but in fact they curved round behind us and nudged the last of the group in the back, no doubt scenting goodies! A few more recently ploughed fields, one since the last walkover, under the M11 and into Theydon Bois Wood. No views from the brow of the hill today, just misty drizzle. Quickly picked a few blackberries to go with apple and custard and we smoothly made our way up to the brick bridge over the tube line, to Theydon Bois Green and so to the station as the cafe had closed ten minutes before our arrival. It would have been a perfect way to compensate for being so bedraggled. Thank you to all those who persevered so cheerfully despite the drizzle. I was relieved and glad that I’d done the walkovers.