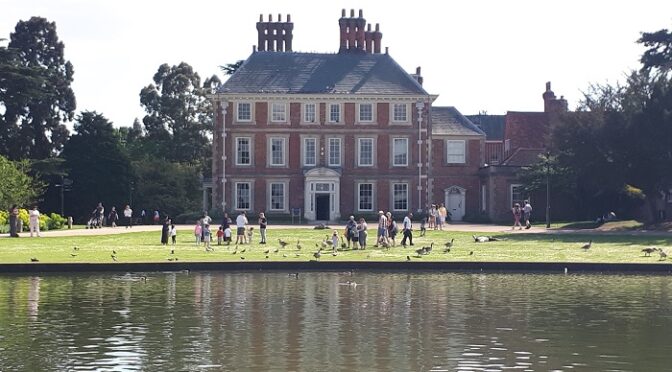 This walk was section 17 of the London Loop. It is a long rural section through Trent Country Park, the farmland of Enfield Chase, Hilly Fields and finishing up at Forty Hall. Fifteen Poly Ramblers joined me at Cockfosters Station. The sixteenth Poly Rambler caught up with us at Trent Country Park which has some lovely wooded sections including a large lake. We passed Camelot Moat thought to have been the Seat of Geoffrey de Mandeville during the reign of William the Conqueror. We continued our walk following Salmon Brook and eventually stopped for a picnic at Hilly fields under a large Oak Tree. Unfortunately, Enfield Council had decided to do bridge repairs over Salmon Brook which was supposed to have been completed last year! We took direct action and got through the barrier and waded through the water or over stepping stones without getting too wet. In the meantime, Danny had moved on to the Rose and Crown Pub just half a mile further on where we joined him for a refreshing drink. I was informed that Dick Turpin had been the Land Lord of the pub. Our final stop was at Forty Hall a grade 1 listed Jacobean mansion. We just had time to explore the walled gardens walk around the lake and admire the ancient Cedar of Lebanon before finishing our walk at Turkey Street Station