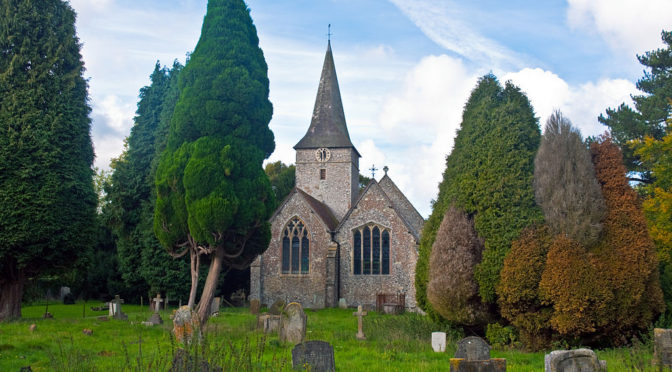 Our second walk with the London Blind Ramblers this year, this time  the ‘elite’ section who wanted a longer and more challenging walk than they normally do.  Pam obliged with a walk advertised as 11.2 miles and undulating, and nine (not very elite) Poly Ramblers turned out last Sunday to guide and support the group.  Pam was relieved to find that we had sufficient Poly guides for the blind walkers. We  soon arrived at Knockholt and set off along the edge of a golf course at a brisk pace.  This continued through fields and woodland paths with quite a few steepish uneven paths to negotiate, and many, many stiles.  At one point we had excellent views of the City of London. i would describe the route we took but to be honest I had little idea where we were! We did pass through a village called Pratts Bottom about two miles in and stopped for lunch in another village called Downe, which has two pubs. After a hurried sandwich lunch on picnic benchesin a squally shower we repaired to the pubs and sat in the sunshine with our drinks. At this point we had done 5.5 miles and naively thought we were half way. The walk continued in a mixture of sunshine and showers as we ascended, descended and climbed a stile every few hundred metres. I don’t know if anyone counted the stiles – there must have been at least 40. Harriet in particular became expert in describing stile height and layout to her unsighted companion.

By 4pm we thought we must be getting near 11 miles but Pam announced that there was another hour and three quarters walking to do. Everyone was getting tired by now  but we soldiered on cheerfully, up and down hills and over the endless stiles until eventually we were back on the edge of the golf course.  By this time the rain had become steady and serious and the group was rather strung out. Pam was determined to get at least some of us on the 17.59 train and about half the group made it while she and the rest followed half an hour later, by this time thoroughly wet and cold. Someone recorded the length as 14.8 miles. I am not sure it was quite this long but it was certainly a challenge and a great walk which we all enjoyed in spite of rain and excessive stiles. Many thanks to Pam.