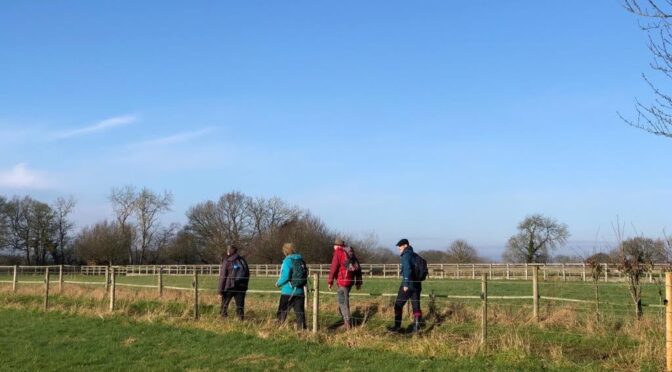 Twenty one Poly Ramblers gathered at Chorleywood on a cold but sunny Sunday morning. We headed through the village and then uphill through woods, under the railway and along a long sunken muddy path to reach the busy A404. Crossing safely we reached the 12th century village of Chenies and paused to admire the Grade I listed manor house, visited by Henry VIII and Elizabeth I.

A steep descent through a wood into a valley followed, with poles proving useful for those who had brought them. Down in the valley we passed Dodds Mill, first recorded as a corn mill in 1200. Then some uphill work to reach the village of Flaunden, a slightly longer route than planned as the leader took a wrong turn.  Flaunden is in Hertfordshire but apparently used to be down in the Chess Valley in Bucks until flooding and the plague forced a move uphill. After we narrowly avoided being mown down by cyclists, and ignoring the pub restaurant, we headed downhill again and inevitably back up and across a golf course until we eventually reached the Crown at Ley Hill (back in Bucks again). Like many pubs these days it wasn’t serving food at weekends but it was open so we had our sandwiches in the winter sunshine and headed in for a drink and to warm up.

After lunch it was only 80 minutes through woods and then across fields and a long sunken path to the outskirts of Chesham. On reaching the town a few of us took advantage of two adjacent tea rooms and the rest headed to the station.

Gillian. Photos by Ida and Stuart